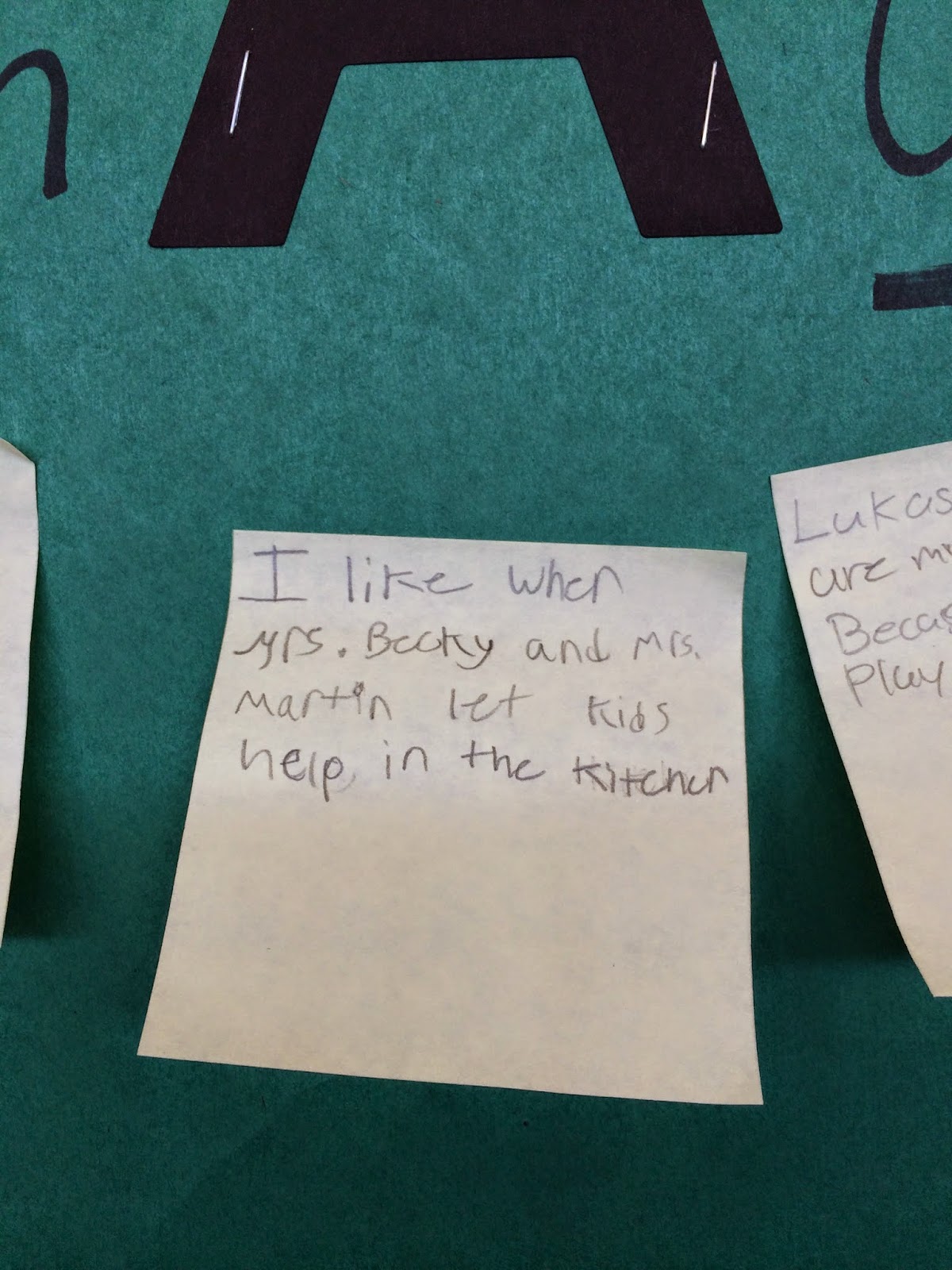 I like when Mrs. Becky and Mrs. Martin let kids help in the kitchen.

We've put them off for as long as possible, but tomorrow we are going to let students into the kitchen.

Self-serve condiments are bad enough, but when I started my job last year I had no idea that eventually kids would come into the kitchen and "help." Once I had gotten sort of up to speed, Becky told me it was time to let the helpers in; helpers I had no idea existed. I panicked just a little bit.

Our kitchen is small, and my work time is short. Making sure no one gets burned by the dishwasher or whacked with a basket takes time and effort. Whereas before I had just washed dishes as fast as I could, I now had to teach and manage students, two things I was trying to avoid by taking a job as a lunch lady. I am that horrible mom who doesn't even encourage her kids to help in the kitchen at home because it's more trouble than just doing it myself.

The better thing is often the harder thing, isn't it? So it should come as no surprise that having student kitchen help is both the most tiring and the most rewarding thing about my job. Becky told me I didn't have to have students in if I didn't want to. But, ultimately, what on earth is more important than people?

We don't have any official procedures for selecting our helpers. They pop up in the window and say "Can we help?" It's usually first-come, first-served, and the competition is fierce, especially during the rainy season. If I notice that someone hasn't had a turn in a long time, I try to save a spot. I'm such a "everything has to be fair" person that choosing the kids without a system is the part that stresses me out the most.

Last year the school boundaries were re-drawn in our district, and something like 25% of our students were new. For a few of them, spending their lunch recess in the kitchen with me was a safe way to get their bearings.

Our kitchen helpers are all over the place. One second-grader last year was on the ball enough that she probably could have run things by herself. I had boys who argued over who had to wipe down a cart with a soapy rag, and I had girls who asked if they could scrub the drains.

In the fifteen minutes they are with me, the kids can give me an earful. Unfortunately, with the noisy dishwasher running, there are times when I can only guess at what they're saying and pray that my noncommittal response noises are not wildly inappropriate for what they've just told me. I hear about their vacations, their pets, their families, and their injuries. One girl told me that she sometimes has to stop and think about what language we are using, since her parents speak to her in Russian (and sometimes Ukrainian); one girl told me she wouldn't go on a field trip because she gets car sick; one girl told me about her three dads. What I can give them is the attention of a friendly grown-up, and that seems to be what they want.

I love watching the kids who have helped in the kitchen before teach a new friend how it's done. I love having helpers that I already know (and whose parents I know) from years of volunteering in my boys' classes. I love that pairs of boys will ask if they can help, almost as often as the girls. I especially love that last year one of the most disruptive boys from Willem's class started coming in. It was a challenge to have him, but it seemed important to give him the chance to do something he could feel good about.

Maybe it's weird to feel this way as a grown person, but I can't help but feel like some of my negative school experience from growing up has been redeemed by these kids. They give me bracelets, they ask me to sign their casts, they ask if I want to borrow a book. It is a sweet thing in my life.

The weather's been so nice so far this fall that when the kids have asked to help, we've told them to play outside instead. We've enjoyed the peace and relative ease of having the kitchen to ourselves. But now that the rain has started in earnest, we'll let them in. I guess it's time, as they're starting to get testy about it. It will be more work to have them there. But it will be worth it.

I love this, Gypsy. I never went to a regular school until 8th grade, but both as a child and as an adult I often ran to the kitchen to help and mostly hide in social situations. It felt like such a refuge, to be able to do something helpful and to be away from the often awkward or simply draining social scene.

Thanks for your comment, Ariana! It's always so interesting to hear others' experiences. I sometimes hide in the kitchen as an adult, but I never would have thought to do it as a kid. :)