I think moms and dads need those milestones the way they come, in rapid succession, in order to keep us putting one foot in front of the other. It helps break up the exhausting job of caring for a baby into manageable stretches.

Eventually the milestones get farther apart. First day of preschool. First day of kindergarten. Lost teeth. First day of all-day school. The significant events trickle down to almost nothing before they pick up again in the pre-teen and teenage years, when they are fewer but bigger.

All that to say, we are in the lull years right now. So the closest thing we have to a milestone is that Nels is ten years old today. First time double digits! Not earthshaking, but not nothing. 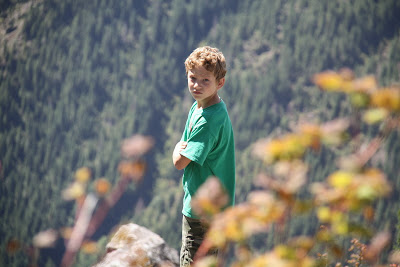 In Nels's third grade class last year, each student got to be the "star" for a week. On one day of that week they were to bring in something written by their parent for the teacher to read to the class. It could be a letter to the student, or a funny anecdote about him, a poem, or a fictional story featuring him. I know Nels would have liked for me to share a funny story, but I couldn't think of anything (believe it or not.) He would have loved to star in a made-up story, but I waited too long to start and ran out of time. I settled on writing a poem. It rhymes only because Nels would not have considered it a legitimate poem if it didn't.

I'm sharing the poem here because all of these things are still true of Nels on his tenth birthday. And we just couldn't be prouder of him or love him more.

His eyes are blue,
His heart is true,
He uses big words
When small words would do.

He plans and he builds,
He invents and he schemes.
At bedtime he imagines new worlds;
Then he dreams.

His memory's grand--
His dancing's great too.
To perform for a crowd
Is his dream-come-true.

Nels is silly and goofy;
He jokes and he plays.
He loves to ride airplanes.
He reads books every day.

He cares about fairness
And doing what's right.
In our little family,
His life is a light.

His eyes are blue,
His heart is true.
We love our Nels so;
Most surely we do.

Our first camping trip of the summer was a visit to Cape Disappointment State Park. We loved the site we had last year, but this year we arrived to find our neighbors right up against (and even in) our space. It was awkward.

That's all their stuff. 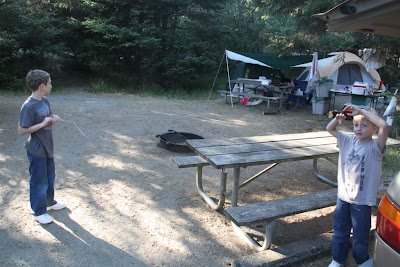 Our spot did have its consolations, though. There was a clearing in the trees just big enough for our tent, which was handy when the weather turned sprinkly. And there was a huge rock right behind us, upon which the boys would have happily spent an entire week. I climbed up once, and my fear of heights kicked in so badly that it was really hard for me to let them keep climbing up to play there. I was always ill at ease until they were back down on the ground. 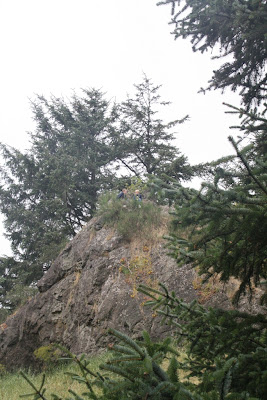 If you click on this picture, you can see what they looked like from our campsite. Tiny. 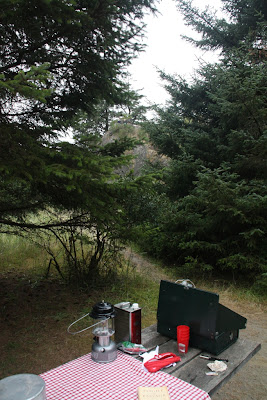 A huge group of teenagers occupied much of our loop and the loop adjacent to us. They were camping across the U.S., transported on charter buses which I never would have guessed could fit into a campsite parking space. The rock was a popular hangout for the teenagers, and boy did our kids study them. (See below.) Nels and Willem concluded that they are not looking forward to being that silly. 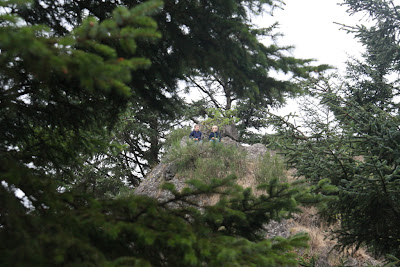 The teenagers sang a lot (the popular songs of the day), boys and girls alike, which surprised me. Maybe that's just what you do when you're on top of a big rock. They were all very quiet at night. In fact, the whole place was more quiet than I've ever experienced at a full campground. It was incredibly peaceful, which is something I don't take for granted after a few bad experiences in summers past.


Shaun bought magnesium flints for the boys. They spent many hours generating sparks and then trying to start a fire. It's a good thing their survival didn't depend on it. 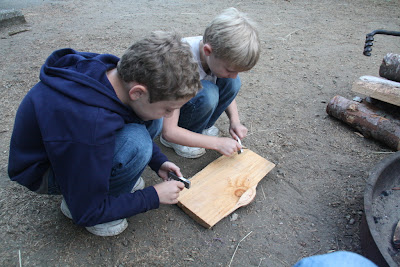 I guess we weren't in much of a wet and sandy mood this year, because we hardly spent any time at the beach.We did drive to nearby Long Beach to watch a movie. Going to the movies may sound like a lame thing to do on a camping trip, but camping trips are pretty much our only vacations, so we pack them full of special-occasiony things. Like giant doughnuts. 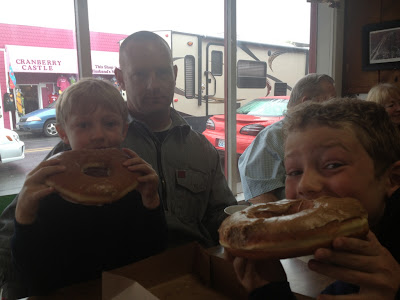 (Unlike last year, nobody even noticed.)


We finally made it to Fort Clatsop, a recreation of the fort Lewis and Clark's Corps of Discovery stayed in from December 1805 to March 1806. They've done a nice job with it. Walking through the rooms made it easy to imagine what life there must have been like. 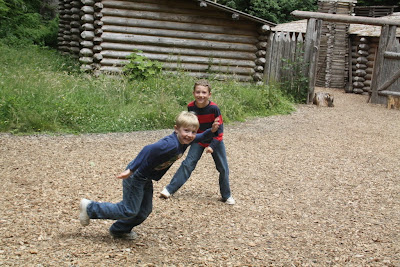 We went to a talk and demonstration about the firearms the Corps had along. Weirdly, I found myself wanting to own a powder horn. They are beautiful objects. 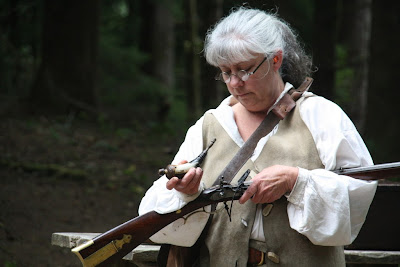 This fellow assisted in the demonstration. I had to include him for his outfit. 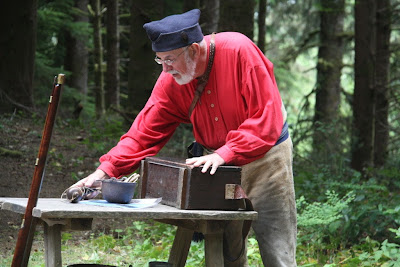 Fire! Shaun tells me this is a black powder flintlock rifle. The ammo was a spit wad manufactured before our very (somewhat grossed out) eyes. 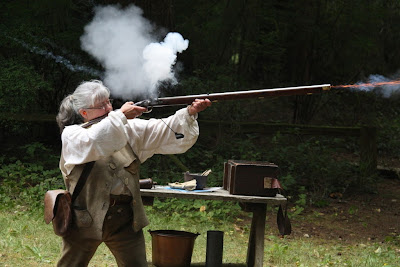 While I really enjoyed all of the furnishings in the fort, my favorite thing might have been learning (in a visit to the interpretive center) that Lewis and Clark referred to moccasins as "mockersons." I don't know why it struck me so, but now I have a hankering to read a novel about hill people who live in villages alongside crafty talking alligators and teach their children to make their own mockersons out of squirrels when they turn five.


My other favorite thing was this waste receptacle. Seriously. It was like a piece of fine furniture just sitting out in the woods. 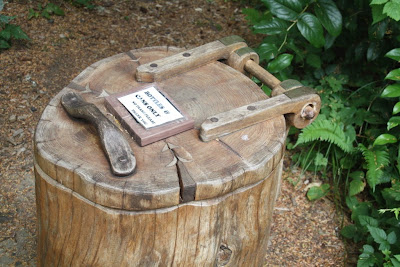 Back at the campground, we hiked to a lighthouse we hadn't visited on our last trip. Before we left for home, we drove around and noted the numbers of the more secluded campsites. That way we can avoid being in our neighbor's laps next time around.


Overall, we would have enjoyed more sunshine and more privacy. But when you get right down to it, all any trip needs is a campfire and a good book to be counted a total success. 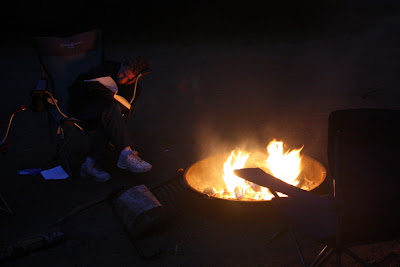 First day of fourth grade and second grade. Nels was nervous, Willem was not. 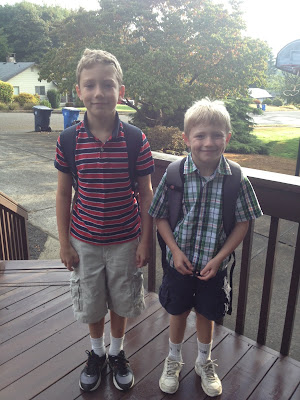 I got better pictures, but they had weird(er) expressions in all of those.

We had to be at school early today, which wasn't a problem. The boys always bounce out of bed on the first day. The second day is an uglier story. We went early because almost a third of the students at our school are new this year (due to boundary changes), and I volunteered to help welcome new families and answer any questions they might have. In a stroke of luck, I was assigned to work the Kindergarten hall.

If there's any better way to start a school year than by watching a bunch of parents walk their Kindergartners to class, I don't know what it is. The first to arrive were a father and son. The dad was dressed for the office in slacks and a button-down shirt. They walked hand in hand down the hall and entered a classroom. I could see the dad, son, and teacher chat for a few minutes, and then the dad turned to leave. The teacher put her arm around the boy's shoulders. The dad left and passed by me in the hallway. He looked at me, and his eyes were glistening.

As I caught up with friends and waved at students and joked with teachers, I was surprised to realize how many people I know, and how connected I am for someone who has a bad habit of thinking of herself as an outsider. I should stop doing that.

I was planning to go home once school started, but one of the superstar PTA moms (she's also my neighbor) had collected a trunk full of donated school supplies from her church and needed some help getting them to the right kiddos. I loved that: see a need, meet it. So I stayed for a bit.

Once I finally left school I went downtown to return a library book. I planned to go to the local coffee house for a free "back-to-school" mimosa, but, being alone, I chickened out.

I did go back to the school in the afternoon to help (the same hard-working mom) organize some new books they got over the summer. School is way more fun when you don't have to go. I'd say we all had a great first day.
Posted by Gypmar at 5:13 PM 1 comment: