Willem and I went to a toy store today. There are two types of toy stores: the Toys 'R Us kind, which give me that same queasy despair I feel upon walking into Chuck E. Cheese's, and the smaller independent stores, which sell lots of exquisite (and expensive) hand puppets and are owned/staffed by the kind of mild, odd folks who would probably wear a wizard hat without complaining.


The toy store we visited was the latter. While my purchases were being wrapped, the grandmotherly proprietor encouraged me to draw a local business coupon out of a jar by the register.

"What did you get?" asked an eager salesgirl who was standing just close enough to unsettle me. I unfolded the coupon and read it aloud:

"50 cents off an espresso drink at the Standing Ovation Cafe or one free music lesson."

One free music lesson! Really! Wouldn't you feel like a jerk going into a music store and buying a discount coffee rather than taking the lesson? I would.

But I couldn't find the coupon anywhere when I got home. Which is too bad, because I was thinking maybe I'd take a guitar lesson. It would be cool to finally learn to play the guitar that I asked for for my 30th birthday just in time for my 40th.

Just peeked outside to see what the boys are up to. They are wearing matching black t-shirts with great white sharks on them. The grass is very green and the sun is shining in the few patches of sky that aren't filled in with dark grey clouds. The boys are fist-fighting in slow motion. It is strangely beautiful.
Posted by Gypmar at 6:30 PM 1 comment:

There are a few people very near and dear to me who are not on Facebook, so this post contains some repeats of things I've posted there. I find it hard not to just stick things on Facebook because it's so easy, but I don't want to double-up. I'm still trying to figure out the right balance of what should go where.

This isn't all re-runs, though; I put a few new pictures in, too, just to be sure everyone gets their money's worth.

Here is Willem with the monster my mom crocheted for him and his drawing of the monster. 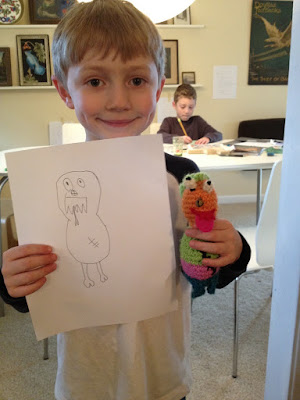 Willem told me several times that he was going to play this trick on me. I still fell for it. 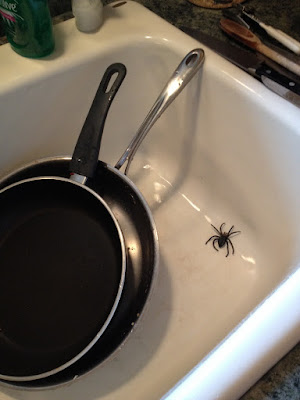 Nels provided the lightning-bolt scar for our little Harry Potter. He's making his "I think that marker is washable" face. 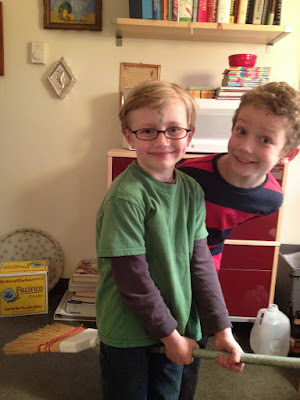 Here is my very first kitchen twine dispenser. My friend Amanda was with me when I bought it at an antique shop, and not only did she tell me what it is, but she also used her internet shopping superpowers to track down some twine fine enough to fit it. It's less creepy when it doesn't have twine coming out of its mouth, but it's also less practical. 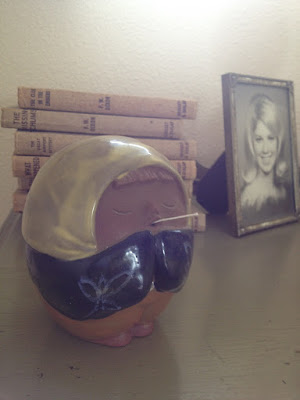 Nothing could cheer Willem up on a day when his classmates were being unkind, not even bringing home a loaf of bread that he made in class. He did eventually eat most of the loaf himself. 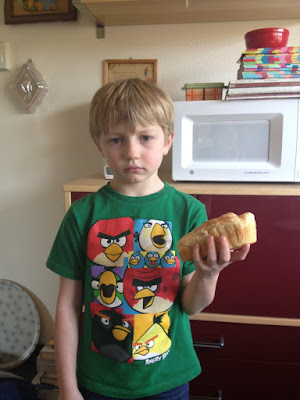 Lilacs from the yard. 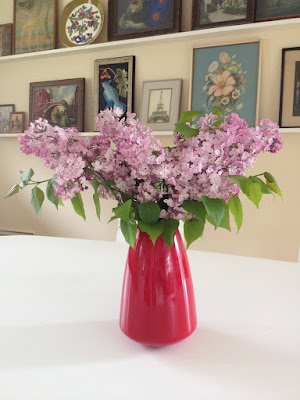 Willem waiting for a playdate. 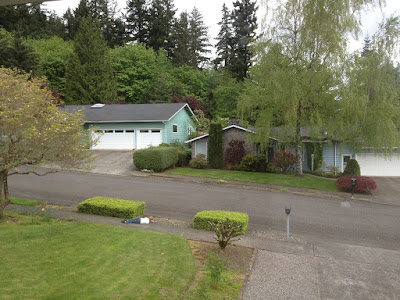 Both of our boys are counting the days until they are old enough to grow facial hair. They both want big, manly beards. Nels does look remarkably natural in a mustache for an 8 year-old boy. 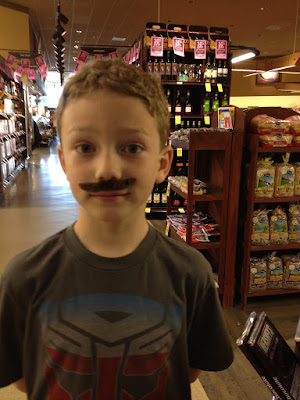 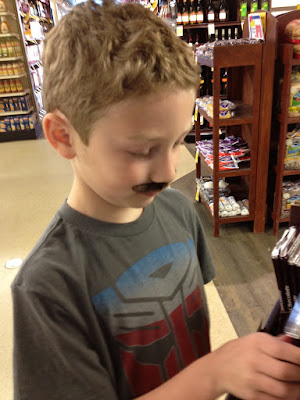 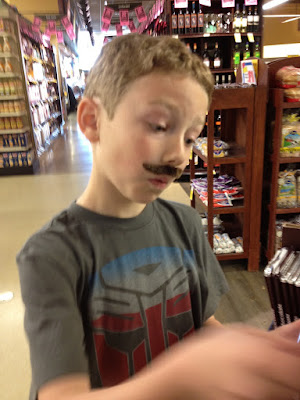 Here's one of Willem's drawings I found lying around the house. I love that his drawings often have conceptual elements or jokes in them. When I was a kid I was trying too hard just to draw something that looked like anything to even think about telling a story or putting in an idea. 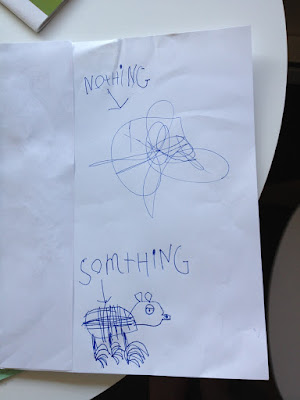 And the best for last! The city recently bought a lake, and it is a crazy short walk from our house. Read here for the unauthorized low-down. Just don't repeat any of what you read to my kids. 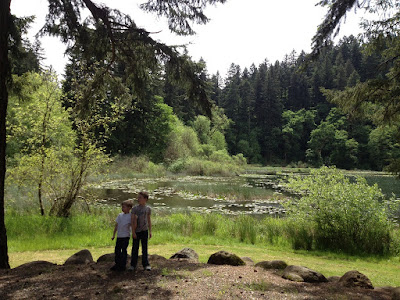 On mornings when the boys are in school, I read my Bible. It's one of those "read-the-Bible-in-a-year" Bibles, divided up into daily readings of the Old and New Testaments, Psalms and Proverbs.

I've had that Bible (and various others) for years, but it almost seems like a different book now that I've tried writing myself. The stories are crazy! And the Psalms--I read them aloud now and I can't believe how much I've been missing.

I was reading out loud one morning when I was caught off guard by something that struck me so true that, instead of continuing on to the next word, I got a big lump in my throat and started to cry. (This may have happened to you if you've read The Chronicles of Narnia or maybe even the Harry Potter books to your kids.) In the quiet, my doorbell rang.

My cheeks were still damp when I opened the door, and I wondered if I looked like easy pickings to the two smartly-dressed young women on my doorstep. I couldn't gather my thoughts enough to do much more than smile when they invited me to a free event in Portland and handed me a tract. I took it in one hand while I wiped my face with the other.

Willem's bus was due in five minutes, so I didn't have time to talk. The tract said something to the effect that I could wake up super-happy every single morning, and that that's what God wanted for me. I wish they could have seen right into my heart. I wish I could have said that what God wants for us is something more difficult, but better, which is to be transformed.

But instead I waved them good-by. I put the tract in the recycle bin and went out to meet the school bus.
Posted by Gypmar at 5:17 PM 3 comments:

I was the parent helper in Willem's class yesterday. It was the day of the Chicken Celebration, which happens after the classroom chicks hatch. The students make chicken hats and gather together in one room, and the school superintendent comes in and reads the book Chicken Chuck to them. Then the music is turned on and the superintendent, the principal, the kindergartners, and their teachers do the chicken dance. Then everyone eats Peeps and calls it a day. Yay, chickens!
Posted by Gypmar at 10:34 AM No comments:

It seems rather ungentlemanly of Shaun to only be turning 38 the year I'm turning 40, but I don't suppose it's his fault. I'll have known him for half my life this year, and it's been an excellent half.
Posted by Gypmar at 5:05 PM No comments: