Thankfully, the first of our three summer camping trips is coming right up. That will be good fun for all of us and provide a more scenic backdrop for the inevitable squabbles. Until then, here is a hodgepodge of pictures of our summer so far.

It turns out that I can buy eggs at church from a family whose teenage daughter sells them for pocket money. At $3/dozen they're much cheaper than any other fresh eggs around. And they are so pretty. 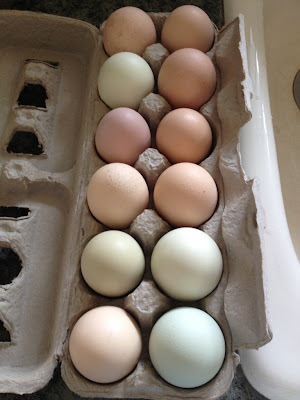 It's always a struggle to fix proper dinners in the summer. I don't want to cook when it's hot. I never thought the kids would get tired of hot dogs, but I think we're just about there. One Saturday evening we splurged and Shaun picked up Panda Express for dinner, and Willem got the worst fortune ever. 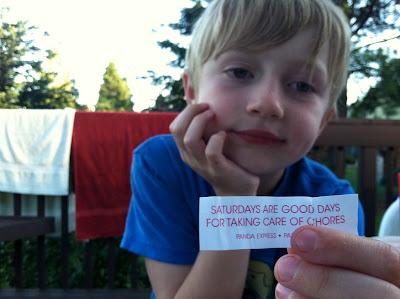 Shaun became an official member of the Fern Prairie Modelers. He now has the key code to the gate and can fly any 'ol time. 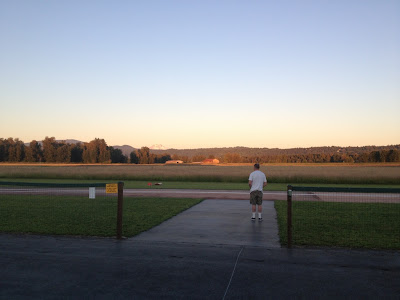 Willem is usually busy reading or playing or working on a project long before the rest of us are up. One morning I came downstairs to turn on my computer and he walked into the office with his hands behind his back.

"I made you something," he said, and showed it to me. It was a tire swing. I love that Willem surveyed his pile of stuff and came up with that. Giving him carte blanche to use the hot glue gun was one of the best decisions we ever made. 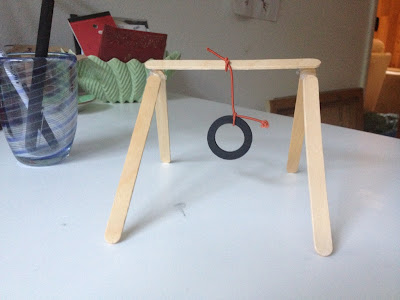 Since I plan so few activities, I try to at least get to the Camas Farmer's Market every week with the boys. It's only one block long, but we usually run into people we know, and Willem in particular looks forward to seeing what craft they have available. It's usually geared towards much younger children, but that doesn't ever stop him from participating. You can practically see his little fingers start to twitch as he gets near the canopy and spots the art supplies.

Two weeks ago we went to the market on a day they'd planned a kids' pie-eating contest. I asked Nels if he wanted to do it (I suspected he wouldn't.) He said, no, he didn't think so. Willem was surrounded by toddlers at the craft table, so it took me several tries to get his attention and ask him if he wanted to enter. Yes he did want to enter, and he said that he was going to win. He didn't say it in a braggy way at all, he just said it as though he had some secret knowledge that none of the rest of us were privy to. After seeing his brother's enthusiasm, Nels decided he'd go ahead and enter too.


Here is Willem grinning at his pie. It was blackberry crumble with whipped cream on top, provided by the fine folks at Truly Scrumptious. First kid to finish was the winner, with the younger ones going first. 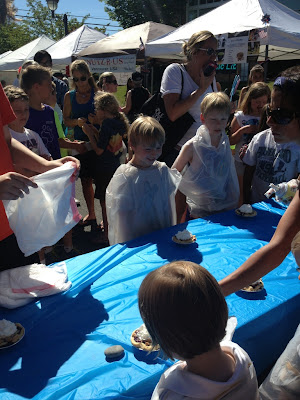 A strange thing happened when those kids tore into their pies. Willem was one of the oldest in his age group, and he went at it with a ferocity that totally took me by surprise. I started giggling. He kept going. Other people started to notice him and began to point and talk about him. I was hot and tired, and for some reason the reaction I had to this unexpected attention was that I moved on from giggling to cackling like a crazy person. Willem shook his pie tin in his teeth like a puppy with a bone. You can see the boy next to him giving him the side eye. At some point the other kids kind of gave up and just watched Willem. And I laughed like a maniac and wiped the tears from my eyes the whole time. Oy. 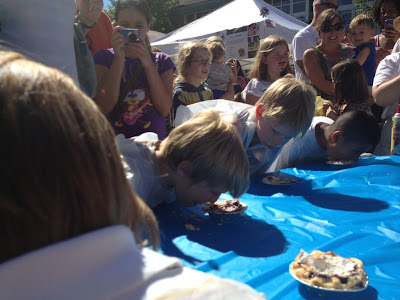 Triumphant and only very slightly queasy. 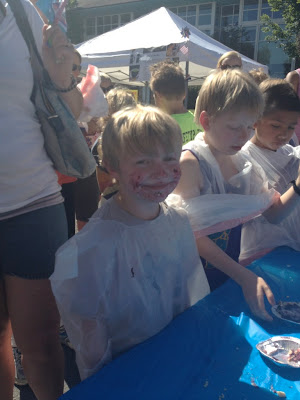 The prize was a $5 token to spend at the market. He wanted to buy carrots, but at $4 for a tiny bunch I told him I'd buy him some at the grocery store and he could save his money for something more special.

Nels probably ate his pie as quickly as Willem did, but he didn't stand a chance against the giant 15 year-old standing next to him. 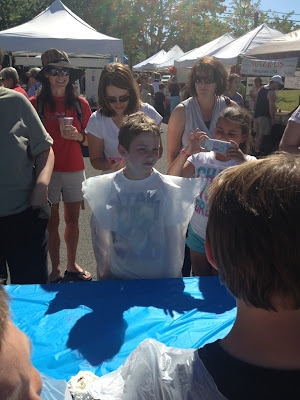 That didn't stop him from enjoying every bite of his pie. 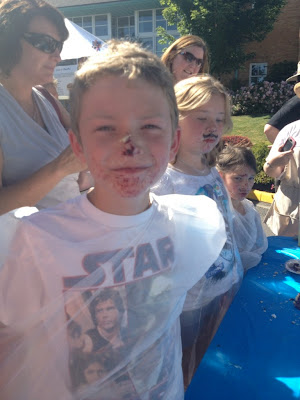 We almost always go out to Shaun's folks' place for the 4th of July. Since it fell on a Thursday this year, the boys had swim lessons first. A local church provided a free barbecue for the entire city right in the park where they have lessons, so we were able to grab lunch before we hit the road to spend a few nights at grandma and grandpa's. 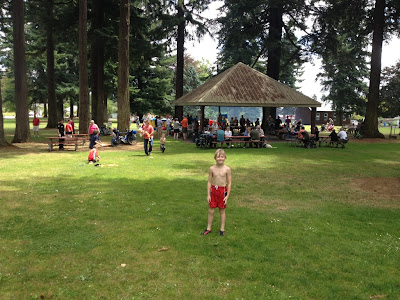 Shaun's dad often has projects lined up for the boys. They love the opportunity to earn a dollar or two, and it keeps them busy. This time they were supposed to be helping dig up a pipe, but mostly they watched. 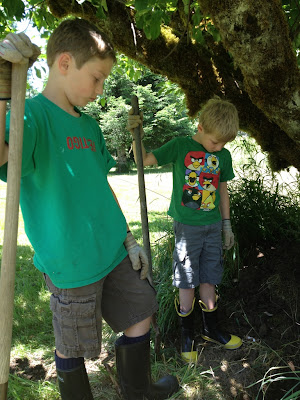 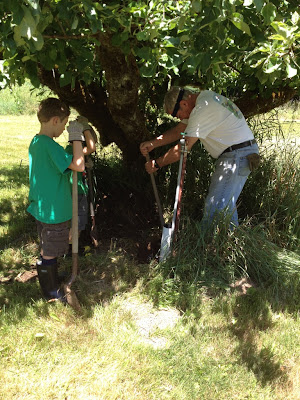 Willem got in there a little bit. Nels watched. 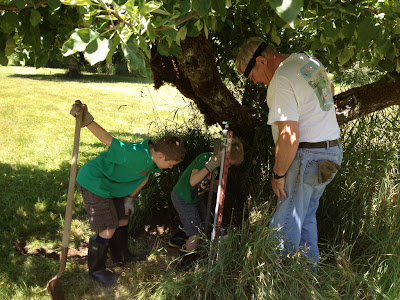 Shaun's mom Linda grew mesclun in her garden for the first time, and it was very happy to grow there. We ate it all weekend, and she sent me home with this lovely batch of greens. 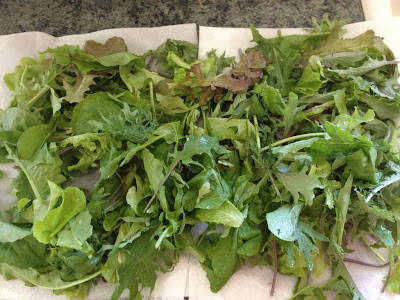 Back at home, Shaun finally (mostly) finished the Piper Cub model he's been devoted to for the past several weeks. My mom was visiting for a few days, so she joined us for the inaugural flight. 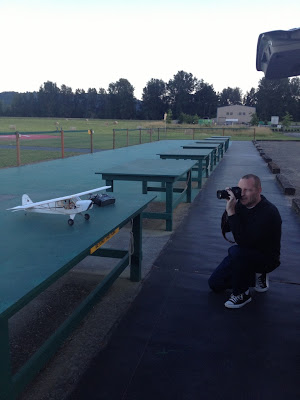 I wish I could adequately convey just how much work it was to build that plane, and how fine a job Shaun did. But if a picture's worth a thousand words, this one will have to do. 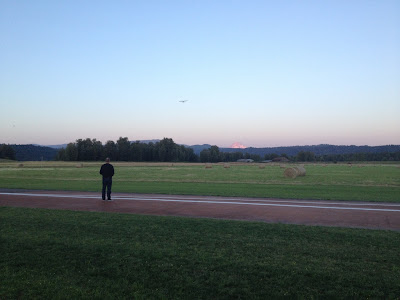 School was out for the year three weeks ago now. The boys picked out their last-day-of-school outfits just as deliberately as they had picked their first. 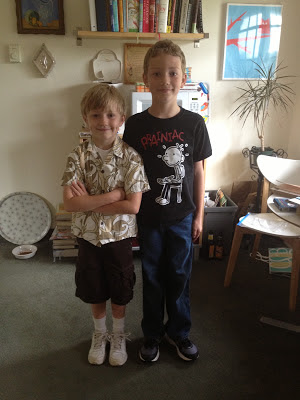 Willem nicely bookended his academic year with Hawaiian shirts. Nels's shirt (a reference to the Diary of A Wimpy Kid book series) may overstate the case somewhat, but personality-wise he definitely has an absent-minded professor thing going on.

Usually the last day of school is a jubilant affair, but the mood this year was surprisingly somber. When I went to pick the boys up, I saw Willem's teacher give each of her kids a huge squeeze as she sent them off home. The past year was her first in the classroom after being the PE teacher for several years, and she loved her students like crazy. Watching her, I totally lost it and started crying. Actually, I'm starting to tear up right now just thinking about it.

I wiped the tears off my face and smiled at Willem. "How was your last day of school?"

When I mentioned to one of the other moms how weird the vibe was, she suggested it might be because of the school boundary changes. Well, of course that was it. Almost a third of the students at Helen Baller will be going to a different school next year, with even more new students replacing them. Some of the teachers will be moving as well. I even found out through the grapevine that our beloved librarian will be changing schools. I haven't told the boys yet, because I don't want to ruin their summer.

As I walked the boys to the car, I tried to rally the troops. "Aren't you guys excited? It's summer!"

"Yeah, I guess," they said in sad little voices.

They couldn't stay blue for long, though, because they'd been invited to a swim party at our local outdoor pool before it even opened to the public. The woman who manages the pool rented it for a birthday party for her nephew, and also invited forty of her children's friends to celebrate the start of summer. Nels and Willem were thrilled to swim for an hour. A rainstorm blew in just as they were finishing up their post-swim shaved ice. We walked home in the downpour to find packages from Grandpa Scott waiting on our doorstep. 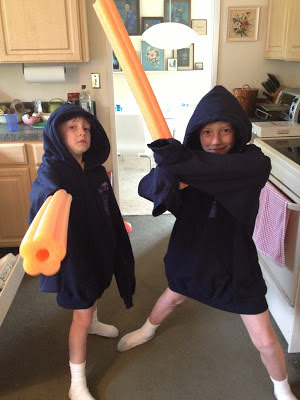 My dad has designed the (award-winning) artwork for the Ski to Sea race in Bellingham, Washington for many years (with a few years off here and there). In our packages were hoodies, posters, and t-shirts from the latest race. The bedraggled boys were quick to snuggle into the sweatshirts and arm themselves with the party favors they'd just brought home. Summer: looking up.
Posted by Gypmar at 3:45 PM 2 comments: