Willem has been irritable and angry lately, reverting to this mood after a few blissfully sanguine months. I think he's growing; I hope that's it.
Today I told him how difficult it is for the rest of us to treat him nicely when he is being so unkind.
"I have to go do something," he muttered after I'd said my piece.
I should have figured out what he was up to when he retrieved a bandanna from downstairs and spread it out carefully on his bed. I was still clueless when he tied the corners together around something he'd placed in the middle. It wasn't until he tied the bundle to a stick, put it over his shoulder, and headed for the door that I put it all together.
"Are you running away?" I asked.
His hand was on the doorknob and he nodded yes at me. But--
"I don't need to if you don't want me to."
His eyes were huge and suspiciously damp. He appeared to be holding his breath as he waited for me to answer.
It was not the time for teasing.
"I don't want you to run away," I said.
So he didn't.
Posted by Gypmar at 11:27 AM 2 comments:

Last week I was headed to the grocery store when the song "Blues in the Night" came on the radio. That song happened to be my solo number in the last play I was ever in. The version on the radio was even in the same key. Fortunately I was alone in the car, because there was no way I wasn't going to sing along. Loudly.
When I got home a few hours later (I made several stops), I noticed my throat was sore. And then I caught myself humming the song. And then I realized that I'd been humming that song under my breath since I heard it. My apologies, patrons of Winco, Fred Meyer, and Costco. Apparently I really miss performing to the point where it's a little bit sad and a little bit crazy.
In other news, Shaun has switched from coffee to tea. He is a tea-drinker. It's a good thing--I love tea myself--but I have been surprised to discover that deep down I must have held an unexamined notion that tea is a feminine beverage. I'm still trying to get used to it.
This was March 1: 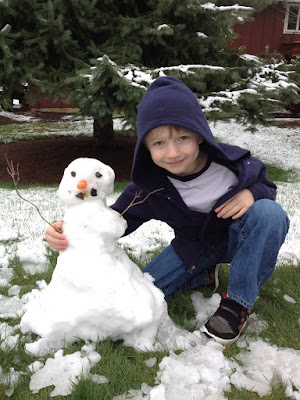 But this week has been sunny and warm (my view from the bus stop): 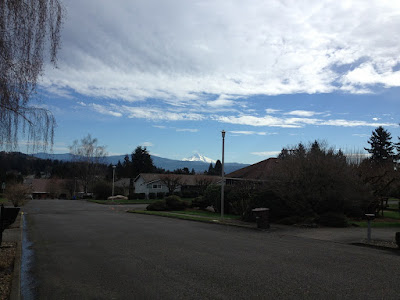 While it's lovely to look at, we haven't been able to properly enjoy the nice weather because our family has been passing around another cold. Nels missed three days of school this week. The secretary told me that 66 kids were out sick on Monday. We with colds are the lucky ones, though. The school has sent out a plea for clothes for the health center; pants, shirts, and underwear. I'll take the illness that doesn't require a change of clothes, thanks.
Posted by Gypmar at 3:31 PM No comments: 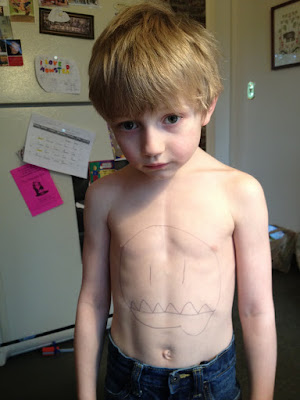 I love to read about writing and creativity. It's so much easier than actually writing or creating something. Fortunately for me, I live with someone who doesn't have that problem. Not only is Willem passionately creative, but I find many of the principles I read about are things that he naturally does.
When I started thinking about writing a few years ago, it was in response to the question "What did you like to do when you were a kid?" And, ever since, I've wished I could recapture the way I felt about writing then. There were no stakes. I didn't worry about being bad or that I might be wasting my time. It was just fun. Now Willem is at that same place, and it's a thrill to watch him do his thing. And it's inspiring.

Willem has a passion. It's monsters. 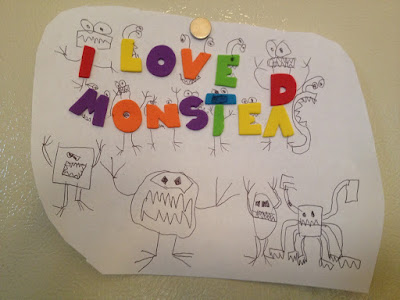 He spends much of his free time drawing monsters. The picture above is entirely his idea...he found the letters in his art supplies and made it work.
Most of us will need to spend a lot of time being bad at something if we want to become good at it. I can intellectually assent to that, but I don't like it. I write less than I want to because it doesn't feel good to struggle. Willem has dealt with this much more productively than I have. He really wanted to be able to draw a skeleton, but he wasn't very good at it. On one of his early tries, he wrote I qwit. He didn't qwit, though. He continued with the drawing, ending up so disgusted with one part that he cut it off. Then he added I maen it. And just to make sure we got the message, he came back later and wrote I sure do. 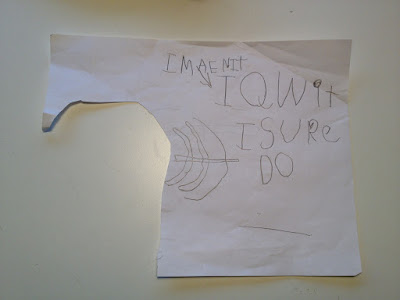 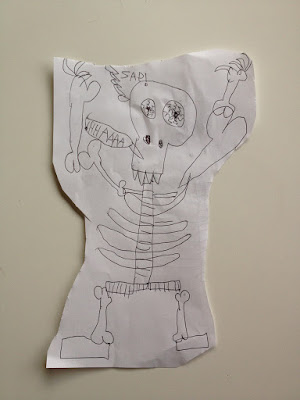 There's a story in the book Art and Fear about a ceramics class in which half the students were graded on the quantity of pots they produced while the other half were graded only on the quality of the best pot they made. All of the highest quality pots came from the students who were only graded on quantity. Willem's never read that story, but he certainly lives it. 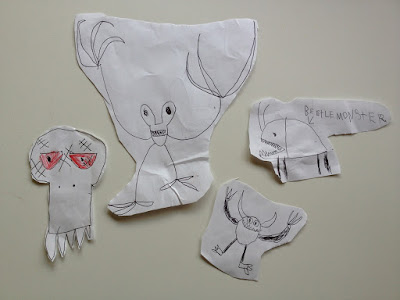 We have drifts of drawings throughout the house--and of course they're not all outstanding--but it's obvious all the practice is paying off. And there are lots of good ones because there are just so many.
Just as writers are admonished never to travel without a notepad, Willem always has his eyes open when he's out and about. He looks at the world through monster-tinted glasses, hoping for--and expecting--inspiration from his physical surroundings. He'll often choose a school library book (one precious pick a week) based on the ideas he can get from the pictures.
Here's a monster made out of a city. (I think this one was his own idea.) 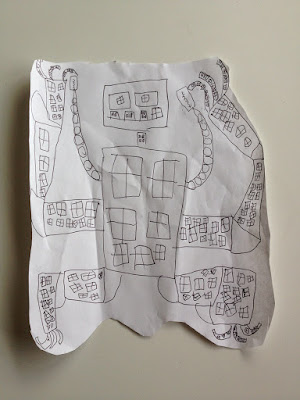 A magazine illustration led to a whole series of food monsters, like an ice-cream cone monster and a peanut butter sandwich monster. I was relieved when I figured out this was a chicken drumstick monster. 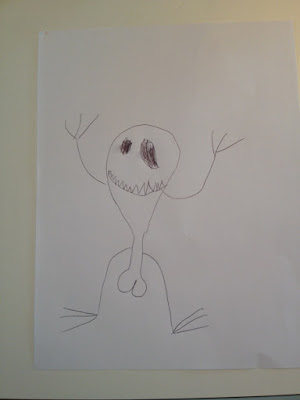 I love it when Shaun sits down to draw with the boys. He gives them a tip or two and they improve by leaps and bounds. Here's a little practice in copying from Doug TenNapel. 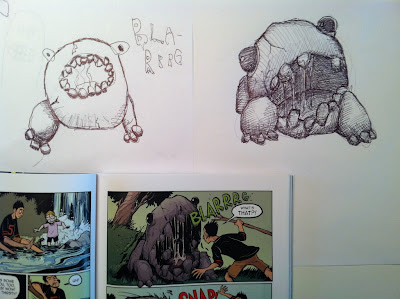 Willem's drawings started out on the creepy side (this fellow is the stuff of nightmares)... 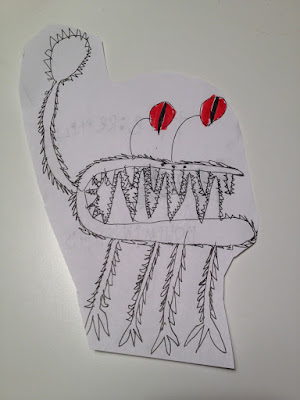 but soon took on a friendlier and less-apt-to-worry-one's-mother tone. 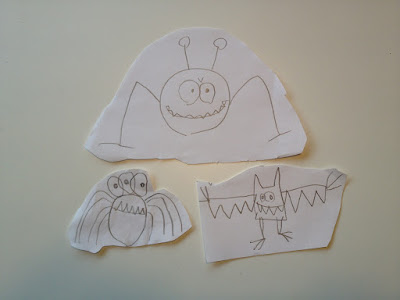 Every once in a while, though, he outdoes himself. Willem assembled this guy last week and left him up at the top of the stairs. It was there for two days, and I never failed to be startled by its malevolent leer whenever I came around the corner. At bedtime on the second night, Willem gently removed the head and placed it on the floor. 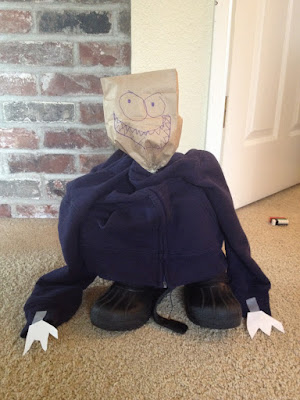