I have to make an exception in this case, though, to tell you about my friend Christi Krug's new book. Without her encouragement, I may not have mustered up the courage to write and share anything beyond this blog.

When I first moved to Washington, I took a Clark College community education class from Christi. The class was called Wildfire Writing, and, as the name suggested to me, it was a little more touchy-feely than I am comfortable with. But I am so glad that I stuck with it.

Some people are going to write no matter what. I am not one of those people. I am insecure and fearful. I will never be able to silence my vociferous inner critic, but at least Christi's class helped me distract it long enough to get some words on the page.

I enjoyed the first section of the class so much that I went on to the second, and then continued on with a smaller group after that. That group eventually petered out, but after a few years I went back and took Wildfire Writing again. It turns out that that negative voice in my head is nothing but persistent. 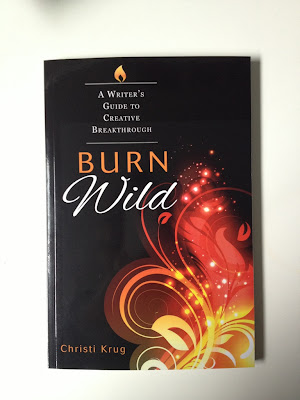 Now Christi has written the book Burn Wild, which includes much of what she teaches in the class and more. (You can buy it here.) The book is a smorgasbord of exercises, prompts, inspiration, anecdotes, and reflections. It's not a "craft" book, if that's what you need. It won't be for everyone. (It's kind of touchy-feely like the class.) But it is full of wonderful ideas and encouragement, and in its pages you will get to know one of the most gentle and generous people I know.

I received a copy of the book to review, but I thought it would be fun to buy one myself and give it away to someone who, like me, has struggled to be creative. I don't have a very big readership here, but if you are a new-ish writer and would like the book for yourself (or would like to give it to a new-ish writer that you care about), just say so in the comments before Monday at noon. I'll pick a person at random (if there's more than one!) and update the post on Monday with the winner.

Here's another helpful review in case you want to know more. I should also mention that this book totally destroyed my preconceived notions about self-publishing. Its quality in every aspect is equal to that of any traditionally published book. I didn't even know such a thing was possible. The fact that Christi put together such an amazing team just makes me respect her that much more.


In the chapter "Small Things" Christi writes this:

Instead of being famous, as I once thought I needed to be, I have found a sphere of influence where I can help and encourage.

I love that. I hope to find that with my writing too.