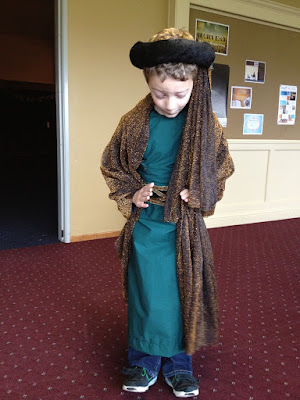 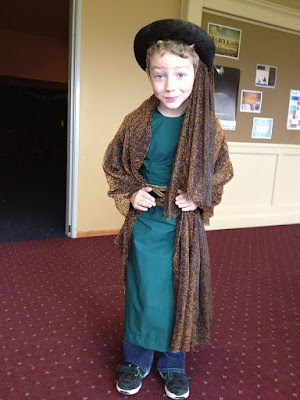 Not wise guy.
We had to have a little talk after Christmas pageant rehearsal about not upstaging the baby Jesus.
Posted by Gypmar at 1:06 PM 1 comment:

Each boy spent his last day of Thanksgiving break working on a project. Here's what they do in their free time:
Posted by Gypmar at 11:00 AM 1 comment:

When Nels started Kindergarten, I was surprised to find that a lot of feelings about my own school experience bubbled up.
I was all but guaranteed to have mixed emotions about school, thanks to some seriously conflicting personality traits. I expected myself to get good grades, but by the 6th grade I was already an inveterate procrastinator. I was a goody-goody who followed rules with an almost superstitious rigor, yet I often resented the authority of my teachers.
Socially, I'm sure I had some fine years when I was younger, but what I mostly remember is feeling anxious about how and where I fit in. I wanted to be cool and knew I wasn't. I didn't know who I was well enough to feel good about myself.
None of that is terribly bad or unusual, and I certainly had some wonderful experiences and friends throughout my education. But my overall assessment of my school years could be summed up in the immortal words of Facebook: It's complicated.
That must have been part of why I was dreading volunteering in my kids' classrooms. And once Willem started Kindergarten, I no longer had an excuse not to do it. Baby steps, I told myself, and committed to one morning a month in each boy's classroom.
Like so many other things I waste energy fretting over, it has turned out to be completely worthwhile, and quite a revelation. I can't believe the breakneck speed at which the Kindergarten class has to move to get through their material in less than three hours. I enjoy watching Willem's teacher lovingly put the hammer down on her squirrelly pupils. And how else would I get to know Sophie, who provides Willem's primary motivation for going to school every day by chasing him around the playground?
Or Bianca:
"Promise you won't laugh, mom..."
"I won't laugh."
"There's a girl at school who wants to...do something to me."
"Marry you?"
Miserable nod.
The first time I helped in Nels's class, I arrived just as recess ended. As the students lined up to go into their classrooms (all four 2nd grade rooms open onto a common area), the kids noticed me hanging around. And all these little boys, classmates of Nels's from years past, or just from around the neighborhood, said hi and smiled and waved to me. Even though I haven't spent much time with any of these boys, I know that one of them lost his very elderly father last year. One boy is being raised by his young, unmarried aunt because his mother is unfit. One boy's mom is in jail.
And somehow it made me hopeful for them, that even though these kids had been through tough things, and though they hardly knew me, they were eager and happy to greet me. I was Nels's mom, and I was welcome. It was so freeing to be at school in that role and not worried about all the things I used to worry about when I was in school.
The next time I helped in Nels's class, his best friend walked over to me and gave me one of those awkward, triangle-shaped, stiff-armed, pat-on-the back hugs. I treasure this time in life when my boys and their friends are proud to own me. I don't imagine it will always be so.
My favorite in-class assignment to date has been manning the cranberry sauce station at Willem's "Native American Celebration." Approximately 45 Kindergartners came through and dropped 20 cranberries at a time into an electric pot. My job was to periodically add water and sugar, stir, and to prevent any students from being injured by the hot pan or the exploding cranberries. I was just thankful not to have macaroni necklace duty.
The most entertaining part of the event was the trading time: each student brought 7-9 little unwanted items from home, and then both morning Kindergarten classes were turned loose in one room to exchange their junk. 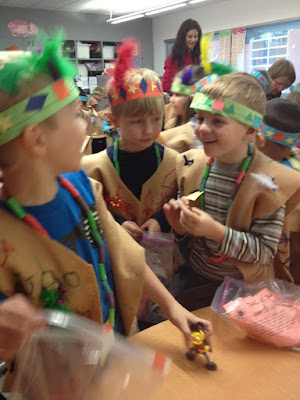 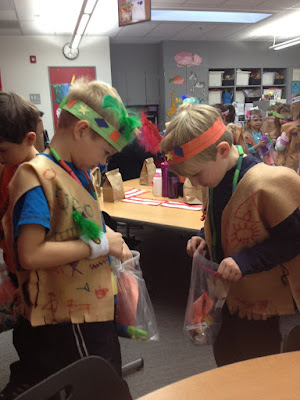 Two of the other moms helping out were originally from South Africa and Romania, which elevated "getting-to-know-you" small talk to pretty darn interesting.
Here is Willem at the Thanksgiving program performance, where the Kindergartners reprised their outfits. He was particularly proud of the star and diamond pattern he made on his headband. 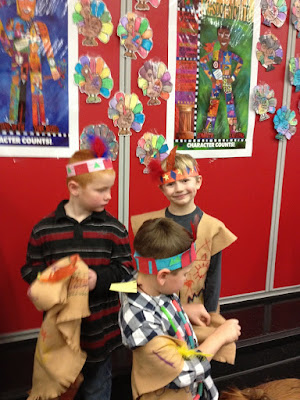 It is a real luxury to be at home and available to participate in school-day activities. I plan to enjoy it until the day my kids beg me to stay away. And maybe even after.
Posted by Gypmar at 1:48 PM No comments: