One of the best things we did this summer was rent the Imnaha Guard Station cabin in southern Oregon. I'm the kind of person who drools over the National Park lodges built in the 1930's by the Civilian Conservation Corps, so I could hardly believe that we could stay in a cabin built by the CCC in 1939 (and now on the National Register of Historic Places) for $40 a night.

When the government is not shut down, you can go to http://www.recreation.gov/ and find all sorts of places to stay: in addition to camping in a tent or a trailer, you can rent a yurt, a cabin, or a retired fire lookout.

Imnaha was a bit of a drive from where we live, but it was well worth it. Once we turned off the freeway, I enjoyed seeing unfamiliar (to me) parts of Oregon. Little towns popped up in the middle of what seemed like nowhere and it was fun to drive through and wonder about them.

A storm had sparked wildfires in the area the week before we came, so we saw a lot of firefighting activity. We drove by a field that held a varied assortment of helicopters (we got to watch one land), and we also passed the firemen's tent city, which was something I hadn't ever realized existed. It was an impressive sight. The cardboard signs of thanks to the firefighters alongside the country roads kept me tearing up. I'm sappy.

Here's our little cabin in the woods. 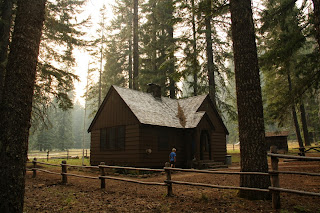 Here's the inside of our little cabin in the woods. The living room furniture is custom-made, except for the antique dresser in the corner which houses the guest book, some games, and the remnants of a mouse nest. 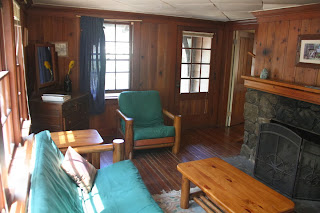 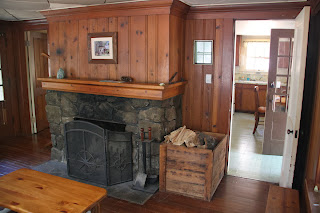 The boys shared this spartan (in a good way) bedroom, and Shaun and I took the futon by the fireplace. 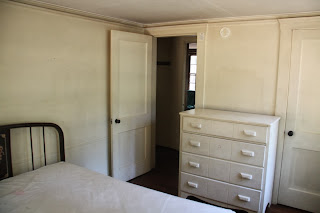 An old horse pasture adjoins the cabin. It's not a bad spot for airplanes, both paper (Willem threw one) and RC (Shaun flew one.) 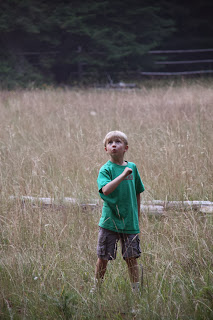 Here's an old water tower in the back yard. All of the smoke in the air made for lovely light. I had to include this picture because it looks to me like it should be one of those cheesy photo wall murals that gets used in an ironic way in a hipster bar in Portland. But also, it's pretty. 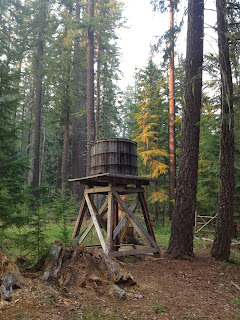 Apparently I walked right by this hornets' nest at the end of our driveway TWICE without even noticing it. Shaun drove by it when he took the boys on a fishing expedition without me and stopped to take a picture. 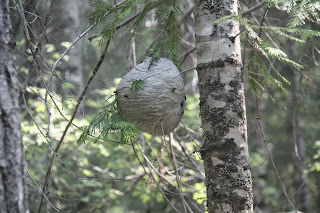 One of the best things about staying at the Imnaha Guard Station is the spring that bubbles up just beyond the back yard of the cabin. It is other-worldly. It's like Tolkien, Lewis, and MacDonald all rolled into one. The sound is enchanting. I've never seen anything like it. Just glorious. 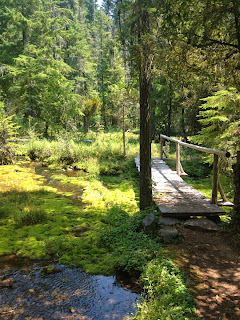 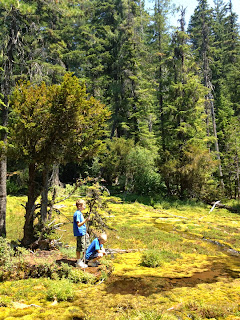 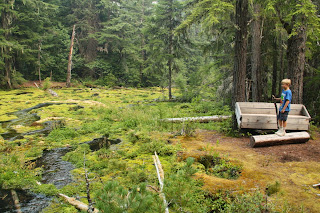 Perhaps because staying in a cabin with a full kitchen and a bathroom is so much less work than tent camping, we ended up playing more games before bedtime than we usually do. Shaun taught Nels and me how to play Solitaire, which is officially my new favorite way to unwind. And here is Nels playing his first game of Scrabble. 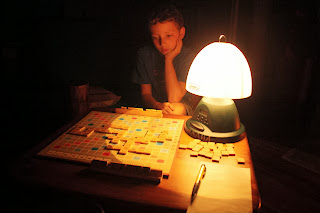 Our only regret about the trip is that we spent so much time exploring the area (pictures to come) that we didn't sit around and enjoy staying put as much as we would have liked to. Next time we'll stay four nights.
Posted by Gypmar at 9:37 PM 6 comments: