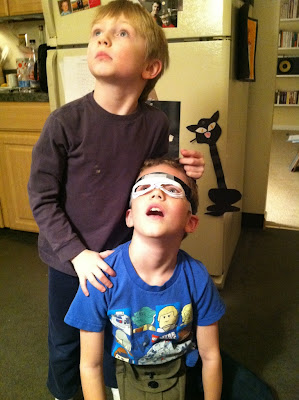 We have not been at our finest these past few weeks. Nels got sick right after our friends left--the kind of sick where he still had a fever a week later and he lost five pounds and he missed a week of school, bringing his grand total of sick days to an impressive total of 11.5.
It would be terribly efficient for everyone to get sick at once, so Willem waited until spring break (the following week) to catch it. He was sick for a week as well. It was a bad, bad bug.
Then Willem got better and I got sick, ushering in our third straight week of being housebound. Did the boys watch too much TV? They did. Did I pay? Oh yes, I paid.
This Monday Shaun went back to work and I had to be back at my post after a few solid days in bed fantasizing about an exotic getaway to the hospital where they bring you giant mugs of ice water and give you a bed that goes up and down.
When I woke up Monday morning, my eyes never really felt like they opened all the way, but I could talk intelligibly again (for two days I mostly made unpleasant growly noises) and I didn't have a fever. I too had lost five pounds, but that's not really noteworthy once one gets into my weight category.
What I wasn't prepared for on Monday morning was to deal with the always strong-willed Willem, who was now hopped up on all that extra television. To call Willem strong-willed is like calling the ocean big and wet: it's true as far as it goes, but it doesn't go nearly far enough.
Willem came home from school, ate his lunch, did his homework and watched a show. After which he asked for another show. I told him that he could watch one after he cleaned his room. And that's when he decided that life was not worth living if he had to clean his room. One has to be at the top of one's game to deal effectively with Willem once he goes into contrary mode. And I was barely feeling human.
What ensued was a grim five hour battle that accomplished exactly nothing. I lost my temper and I yelled. There are few things uglier than the sound of an adult screaming at a child, and I retreated to my room with my phone where I called Shaun to sob that I had lost control of myself and that I was failing, failing, failing at being a good parent. I had handled the day all wrong and I knew it and it felt awful.
Meanwhile Willem stood out in the hallway and shouted things at me like "WHO ARE YOU TALKING TO?" and "STOP THAT CRYING!"
When I relayed this to Shaun, he laughed. And then I laughed too. And then I knew it would be OK and that we all have those days and nobody's perfect and I'm probably not going to single-handedly wreck my kid.
The next day I was well enough to restock our empty fridge, so Willem and I went to Winco to buy some groceries. An opportunity for a bit of redemption from my previous day's failings presented itself in the form of an elderly woman with lank gray hair who didn't have her teeth in. She approached me in the bulk foods section and pointed at the fennel bulbs in my cart.
"How do you pick those?" she asked. I told her what to look for and went on to describe the different ways I use fennel and what I was planning to make with the bulbs I had. She reached into my cart and broke off a feathery piece of frond and sniffed it.
"There's all these vegetables here that I don't know how to cook. Didn't grow up with 'em. I like vegetables. My son, he wants me to find out how to cook all the different vegetables. He grows our beef and our pork and has a big vegetable patch too but he said 'Mom, I went to Winco and they have all these other vegetables and I don't even know what they are.' I told him I'd get a cookbook, A to Z, or I'd look on the internet..."
We talked for a while longer, affirming the many fine qualities of vegetables, and we then we parted ways to finish our shopping. Willem had watched the whole exchange quietly, and as we walked away I looked at his face to see what he was thinking. He looked up at me and said, "Mom, you're nice."
Now being friendly and helpful to a stranger is just pretty standard-issue human decency. But I did feel like I'd been given the opportunity to model some better behavior than I had the day before. I was thankful for the chance, and I was thankful Willem noticed.
Posted by Gypmar at 11:40 AM 9 comments:

Pacific Northwesterners like to say that you have to ignore the weather when it comes to your outdoor plans; otherwise you'd never do anything outside. Shaun seemed to have no trouble adapting to this truism when we moved here; I, on the other hand, have not managed to reconcile myself to enjoying outdoor recreation in the rain. I have no interest in being out in it.
But there does come a time when my need for fresh air exceeds my dislike for being cold and wet. That time is March. So we went for a family walk on Cottonwood Beach. The Columbia River is beautiful regardless of the weather. 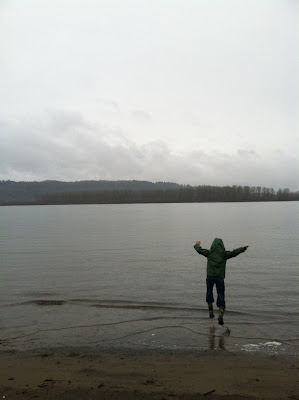 These guys were fishing on this spit, and they were catching and releasing some big fish. 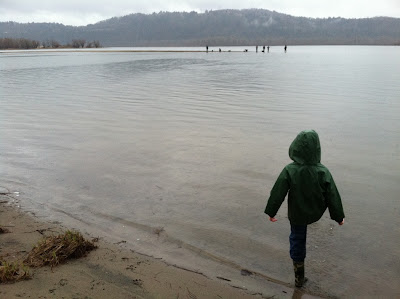 If you click on this photo, you might be able to see the very large sturgeon we watched them reel in. There was also a seal or sea lion who kept popping up, trying to get in on the giant fish action. 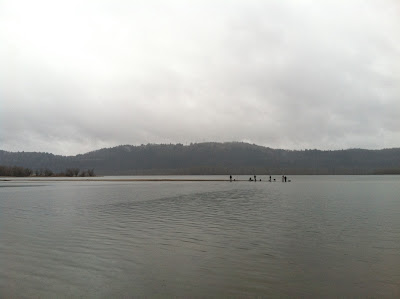 By the time we got back to the car, the boys were soaked through and coated with gritty sand. For some reason I don't mind that in the summer time, but in the cold weather I just can't hardly stand to think about it. So long-suffering Shaun very graciously peeled off their wet socks and dealt with the mess, as he always does any time we go to the beach. He is a good man.
After the fact, it was well worth every shivery moment to hear Nels go on about the fish and the seal/sea lion, which he was flabbergasted to see in "our" river. He declared it to be one of the best days of his life.
Here's Willem taking advantage of one of our few dry March days. 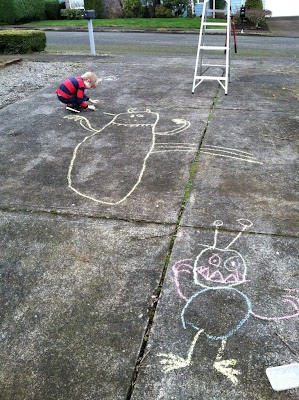 I was helping in Willem's classroom this morning and I noticed a recent project hung on the wall. Each student had painted a monkey with a word bubble saying "I am curious about..." Willem's said, "I am curious about if I will still love monsters in heaven."
We have no particular reason to celebrate St. Patrick's Day other than it presents a good opportunity to have something out of our normal routine for dinner. Any holiday that comes with meal suggestions is A-OK with me. So in honor of the holiday (it was the day before) I tried this recipe for stuffed baked potatoes from a new cookbook I got this year. I will make it again and again. And not just for St. Patrick's Day. 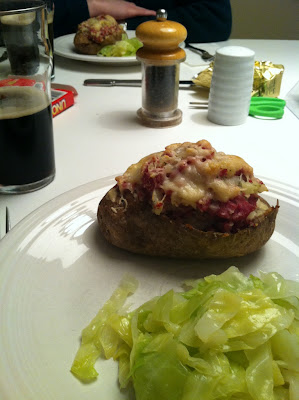 On the actual 17th, we spent the Saturday out at the Grandmartins. We went for a walk. It wasn't raining! 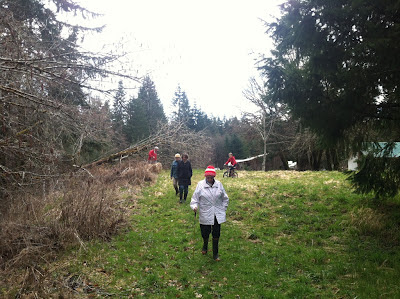 Grandpa shows Nels how the beavers have badly damaged the trees. 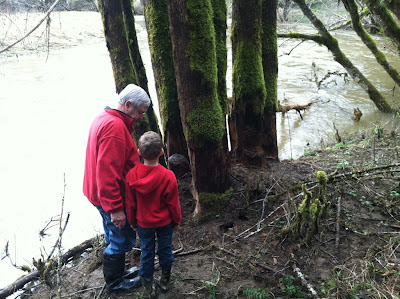 Here's a little before-and-after. I don't know what that piece of electronics technically is, but I do know that Shaun was looking forward to shooting some tidy holes through it with a big gun. 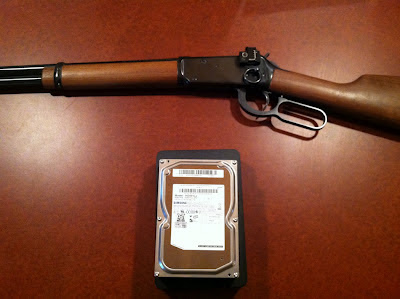 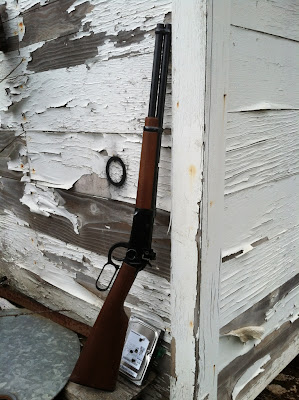 Nels and Shaun played Monopoly together out at the farm, and we had to go out the very next morning and buy the game for them to play at home. Nels loves it. On an unrelated note, can you believe our cat is twelve years old? She looks good. 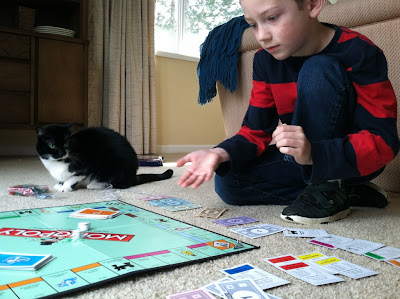 Our friends the Hamiltons came out the next week and stayed with us for a few fun days. Shaun made a new cocktail for the occasion. Jeffrey Morgenthaler claims to make the best Amaretto Sour in the world. And indeed, it was a truly delicious cocktail. We were all a little shocked at how good it was. 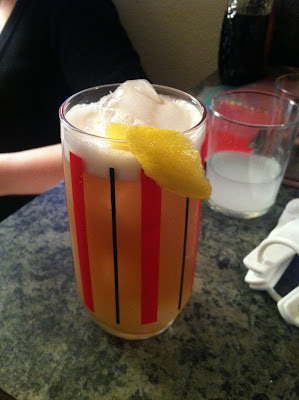 On the Friday of their visit, Shaun used his day off to make granola. It's his mom's recipe. It calls for 24 cups of oats. We've eaten almost all of it already. 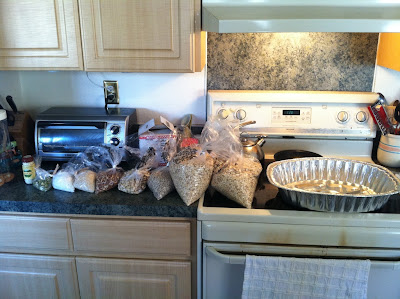 The next day, all the boys went to look as the Camas Fire Department burned down an old bowling alley in a training exercise. 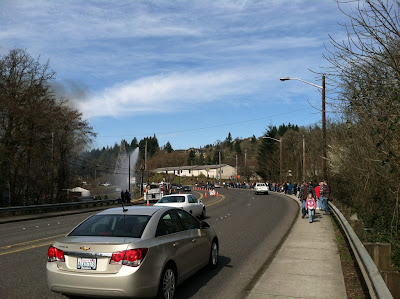 There were lots of old-timers sad to see it go. It used to be a dance hall and a roller rink in the 1950's and it was the only thing going in town. 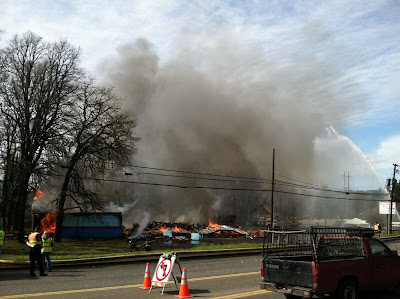 I always like to use company as an excuse to try new recipes. I had good luck this time, and hardly anything disappointed. I can definitely recommend these Almost-Famous Swedish Meatballs. And this Ina Garten recipe for White Pizzas with Arugula was a keeper, even using the store-bought dough I cheated with (the secret is in the garlic-herb infused olive oil.)
And, finally, I've been seeing lots of recipes around in which you crack eggs on the top of a savory base and bake 'em, and that appealed to me. So I tried this Bacon, Tomato and Cheddar Bake. Unfortunately I overcooked the yolks a bit. And it was crazy salty. Still, it was good and I'd try it again. 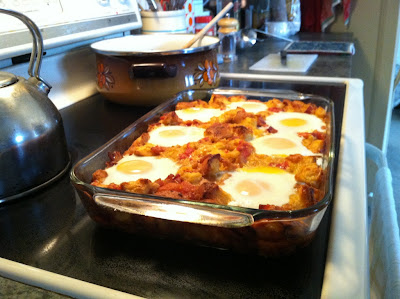 Not anytime soon, though. We're well into April and I still feel all cooked out for a while.
We had really nice weather while our friends were out, which was a pleasant and welcome change. Good weather is something I just don't take for granted anymore. Good weather means the monkeys can go out and play. 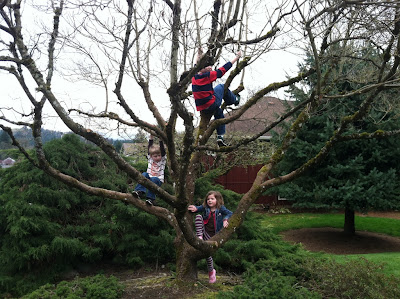 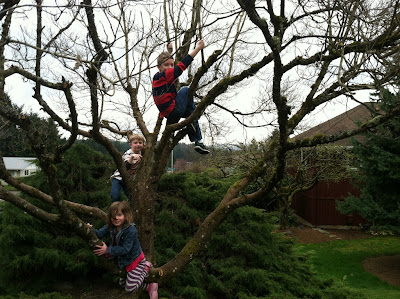 Upon starting in on their lunch-time grilled cheese sandwiches:
Willem: "My mouth is burning."
Nels: "Mine's rejoicing."
Posted by Gypmar at 1:37 PM 2 comments: