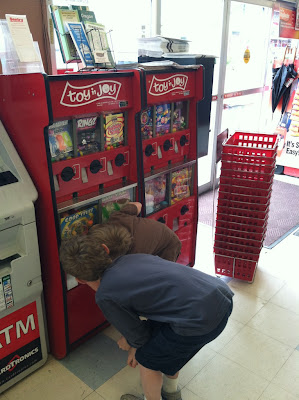 It's been a while since I put up a proper post. Long enough that my mom called to make sure I was OK.

I'm fine. I've just been thinking a lot about aging and mortality lately, which is hardly the stuff of sparkling blog posts. It could be the stuff of thoughtful and insightful blog posts, but not if one's thinking on the topic is as unoriginal as mine has been.

Also, I've been reading a lot. A lot. I think I hoped that if I just crammed enough novels in I'd eventually fill up -- and at some point my seams would give way, and a bit of fiction would seep out. That hasn't happened. Instead, intemperate reader that I am, I emerge from each book with a small hangover. It's like when a morning dream is interrupted, and it takes a while to sort out which world is the dream one.

The boys are finally out of school, and we've had a mixed start to our summer. The last day of school was uncharacteristically clear and sunny. As Willem and I stood outside the playground fence waiting for Nels, we heard a high roar coming from the school that got louder and louder. "What is that?" asked Willem.

Then a swarm of kids appeared, screaming, arms raised in the air, running full-tilt for the line of buses waiting to take them home for summer. On our walk home, one of the buses passed alongside us on a parallel street and we could still hear the kids screaming.

We took advantage of the beautiful weather (also our car was in the shop, so we couldn't drive) and walked to the library to sign up for the summer reading program and then strolled through the farmer's market. We took the boys out to dinner at Beaches (their choice) to reward them for a job well-done this school year. "This is the best day ever," said Willem.

"It's not over yet," I told him. Why would I say that? What is wrong with me?

At 1:30 in the morning, I heard Willem crying in the bathroom. I got there just in time to see him throw up his celebratory dinner. I finally got him all settled back into bed and tried to get to sleep and realized I wasn't feeling so good myself. Mine hit at 4:30 am. That was last Thursday. Nels took his turn last night. He is ever courteous, even when sick. "Thank you for holding the bowl for me, mom." Bless his heart.

So our summer activities so far have consisted of lots of reading, probably a little too much TV-watching, a little housecleaning, and lots of laundry. I don't really mind that we've had to keep it small and quiet for a bit, especially since we're leaving for three nights of camping this week. If Shaun doesn't get that stomach bug, we'll be in business.

(The good stuff of the title can be found in the photo, if you can see it big enough.) 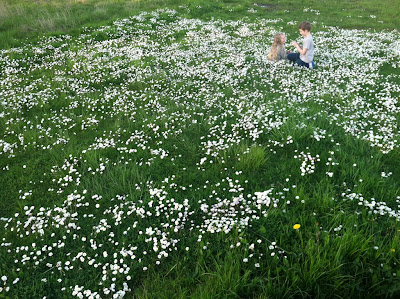 Here's Nels showing Mila how to make a daisy chain while our families walked together in the park. For real. This really happened. Just like this. This photo is not staged. Ridiculous.
Posted by Gypmar at 7:51 PM 4 comments: