My dad passed away on April 5 this year, about two weeks before what would have been his 66th birthday. My sister and I knew that his lungs had not been doing their job for quite some time, and we knew he would not "get better," but his final decline was swifter than we expected.

I always wondered how my dad got the name "Scott" a generation ahead of all the other Scotts I knew. My dad didn't know the story, and I never asked my grandma about it before she died. Maybe she sensed  that he would always seem young, even when he was grown, and so the name would suit him. 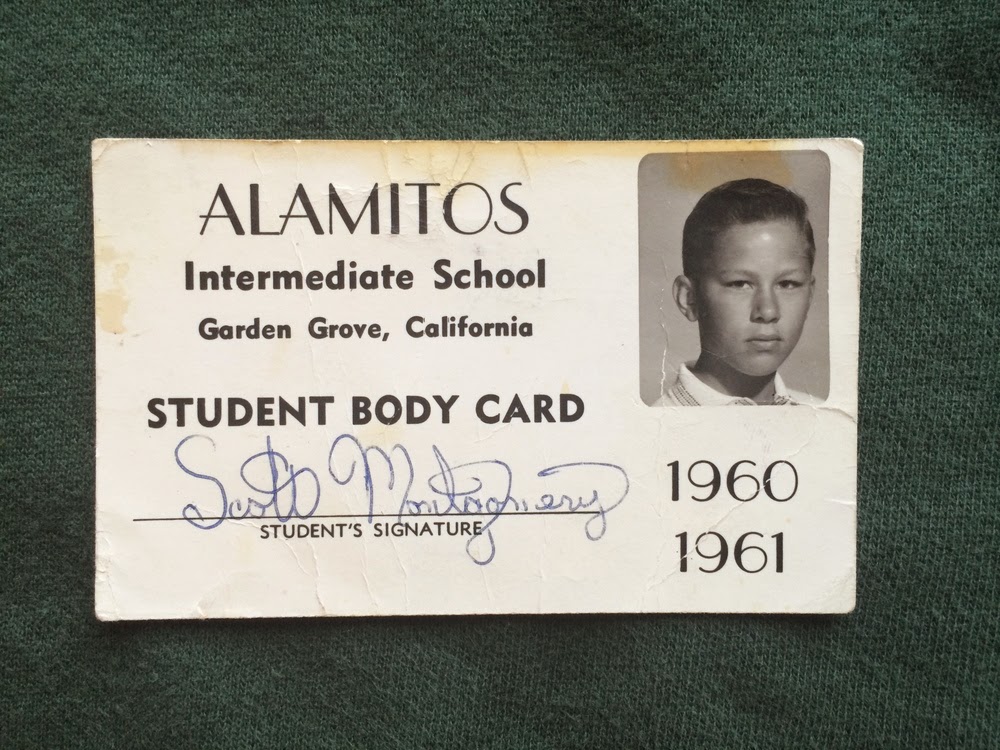 My sister Annalaura and I grew up in a blended family in Southern California, in a household headed up by our mom and stepdad. Our Dad Scott lived in Bellingham, Washington, and we saw him about once a year, at Christmas or in the summer.

Visiting Dad in Washington was like going to another planet, a wonderful planet. We loved my dad and step-mom's old house overlooking Bellingham Bay. We loved the smell of the evergreen trees. We loved the novelty of getting a Blizzard at Dairy Queen. But mostly we loved being in the orbit of Planet Scott. He was inventive and funny and moody, and had a ton of charisma. He took on an almost mythical quality for me. It was like having a unicorn for a dad.

Because I didn't see him very often, it is taking a while to sink in that my dad is gone. I don't have day-to-day memories of living with him. What I am lucky to have, though, is a highlight reel of remembrances.

1. He loved the ocean and the natural world. See that student ID card up there? When my dad was that age, he used to stick his finger down his throat to make himself throw up, so he could stay home from school and go surfing instead. Later he was a commercial diver in Washington and Alaska. 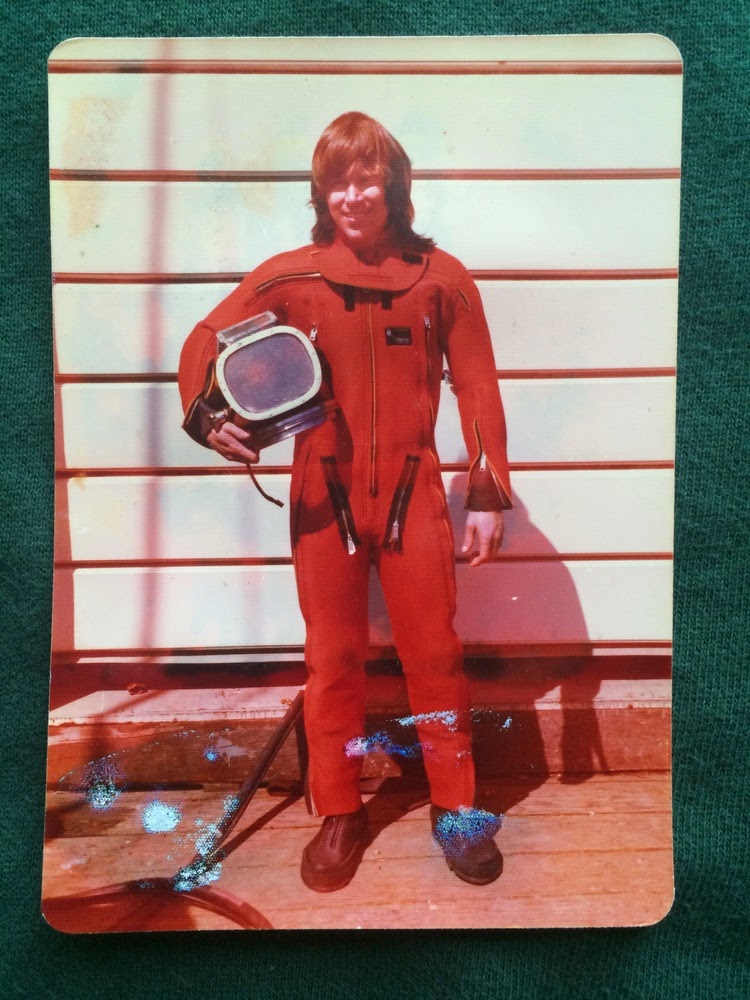 One of Dad's favorite spots to take us on our visits to see him was  Larrabee State Park. We spent many happy (and chilly) hours combing the beach there. 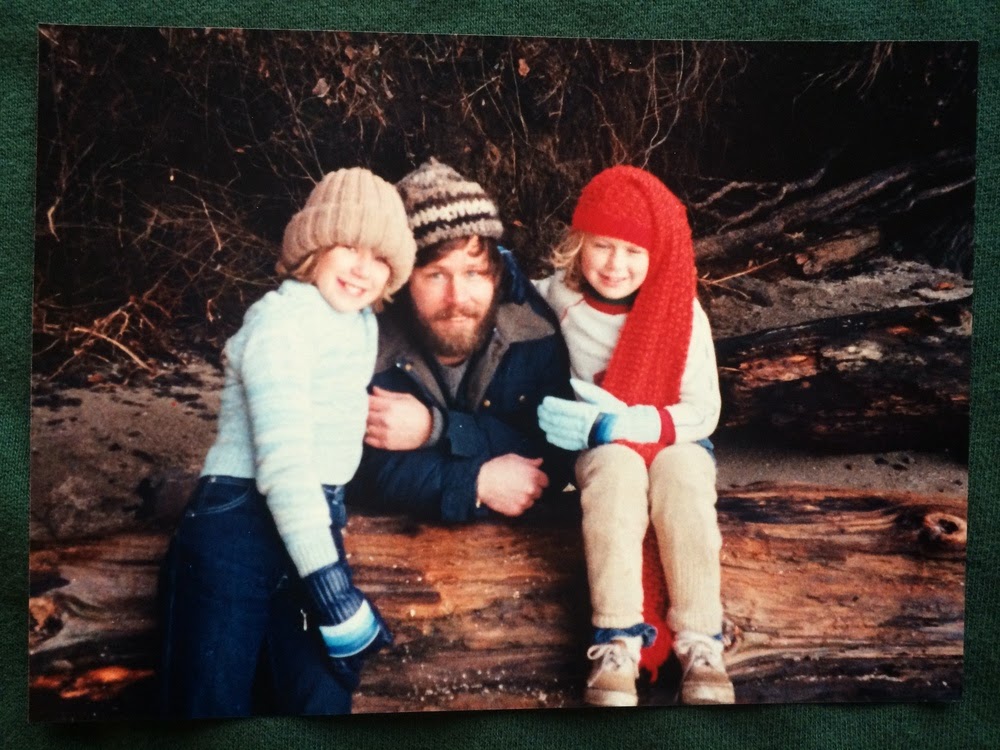 Dad regularly took us fishing and crabbing on his little boat. One year he treated us to a deep-sea fishing excursion off the coast of Vancouver Island to catch salmon and halibut. One other memorable time, he took us on an ocean kayaking camping trip in the San Juan Islands. Things went slightly off-schedule, and we found ourselves paddling by moonlight in the wee hours of the morning. Tide charts and driftwood and rocks and fish guts and crab tomalley make me think of my dad.

2. Dad was creative. I wish I still had my childhood toy box. He painted it in a 70's Art Nouveau revival motif on a background of avocado green. He drew and painted beautifully. Dad was self-employed as a graphic designer. He worked at home in his basement office, and once I grew up and made some artist friends, I realized that I wished he could have found a community of creative people (in addition to his wife Juli, who is amazing at making things herself) to be a part of. He was such a Lone Ranger in that regard, and I think he would have benefited from the input and camaraderie and encouragement of some like-minded people.

3. It's easy to say that my dad was funny and charming, but it's almost impossible to communicate the reality of it. He was always telling outrageous and often true stories, like the time when, as a teenager, he was hand-picked to be an extra in the Antonioni movie Zabriskie Point, and traveled to Death Valley with the production to be part of its most infamous scene. Or the incident in which he finagled an honorary discharge from the service (thereby keeping his GI Bill benefits) by being intentionally caught with a drug that was so new as to not have been ruled illegal yet. Dad read a ton and had a very active imagination. Every once in a while Juli would have to amend one of his tales: "That part didn't happen, dear. That was a Kurt Vonnegut story."

To the end of his life Dad was like that. Annalaura and I came up to visit him and Juli when he was failing. At one point we were all trying to get him safely down the stairs so the paramedics could transport him to the hospital. Dad narrated the whole thing (though he had not a breath to spare) as though he were the guide on the Jungle Cruise at Disneyland. It was so absurd and wonderful. That will be a weirdly treasured memory.

4. Dad's hair was a major part of his identity. He spent forever in the bathroom every morning with his blow-drier and his extensive collection of hairbrushes tending to his silky brown hair. He cared more about his appearance than the average fellow is prepared to admit. It was exasperating and endearing. He asked Juli well in advance of his death what picture she was planning to use for his obituary. I think he would have been pleased with her choice. 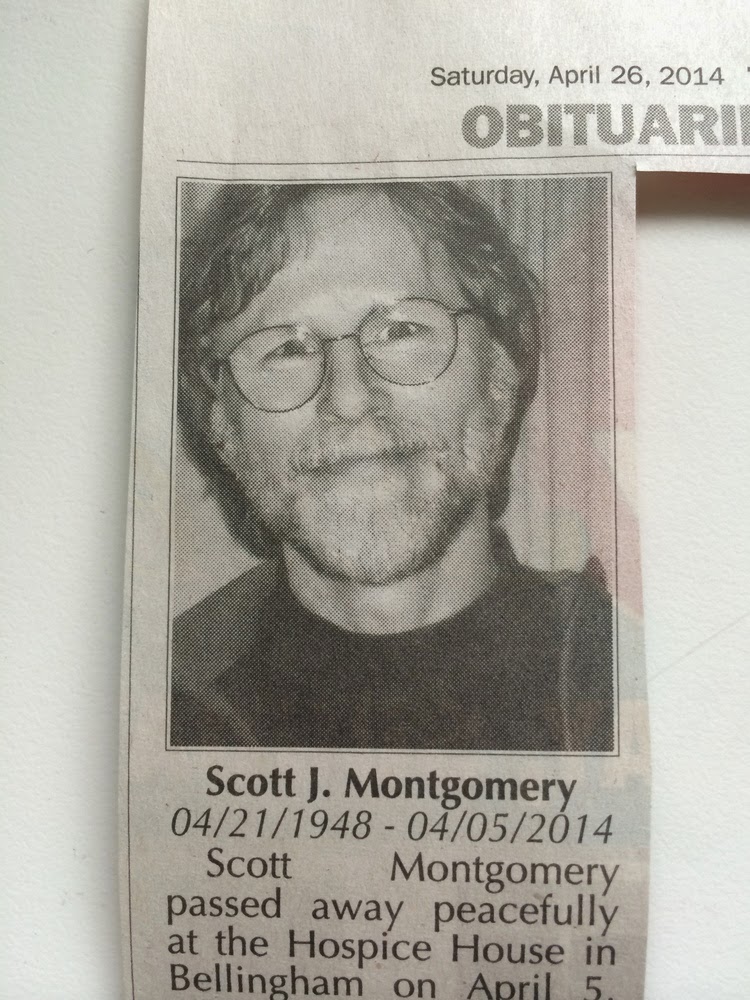 5. My dad and Juli were married for thirty-four years, and I am so glad they had each other to love. I love them both.

I don't know if Dad ever imagined that one day he'd be taking his grand-kids to the beach at Larrabee. I'm glad he got to. I'm so glad they got to know him. 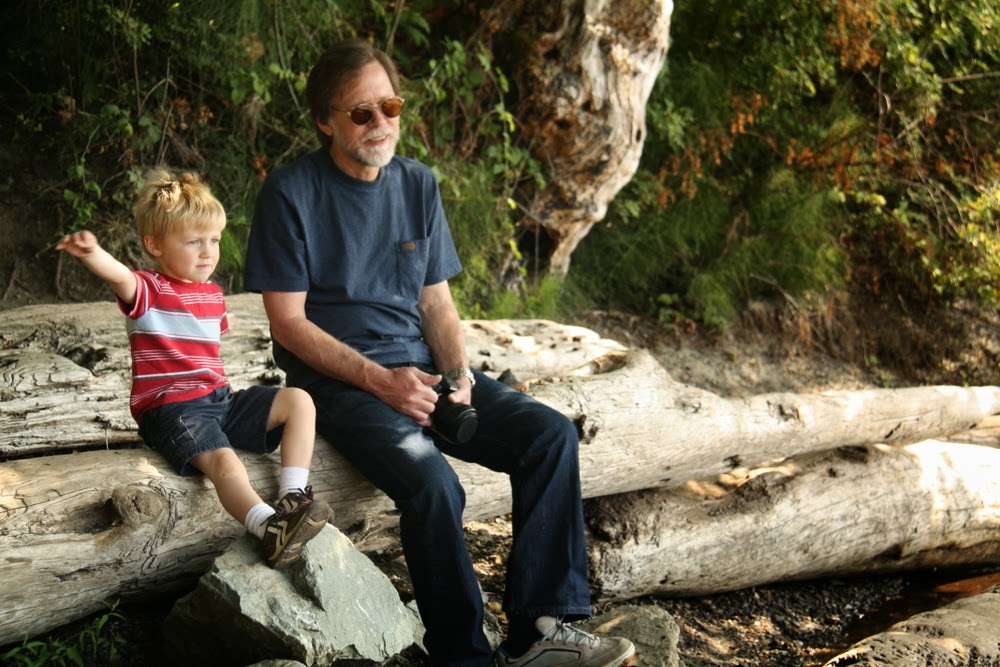 So long, Dad Scott. We miss you now, and we'll keep on missing you. The whole big world will miss you, whether it knows it or not.
Posted by Gypmar at 9:49 PM 5 comments: