That Ought to Do It

Willem has always gone happily to sleep at night until recently, when he started saying he was scared and asking to leave his lamp on. It took me a few weeks to worm the truth out of him:  he'd picked up a spooky joke book at the school library and gotten creeped out by one of the illustrations.

We let him have the extra light for a few nights. We tried talking it out. We prayed together. None of it seemed to help, and, after a few months, I lost my initial sympathy and patience. By then, the nightly discussion of his fears had taken on the flavor of a token ritual. It always took place at least five minutes after he had been tucked into bed with hugs and prayers.

"Mom, I'm scared. IS THERE ANYTHING YOU CAN DO ABOUT IT?"

It's gone this way for what seems like ages, so I was pleasantly surprised last night when I put Willem to bed and the conversation took a new turn.

"Mom, do you know what I do when I'm feeling scared?"

"I think of ponies skating on lollipops. Well, not a bunch of lollipops. Just one. It's purple." Then he grimaced. "Do you think that's too girly?"

It wasn't the skating ponies or the lollipops he was worried about, just the color purple. He's been getting some (not unexpected) flak at school for carrying an orchid and lavender-colored lunch box that he picked out himself.

Waiting for my appointment with the neuro-opthalmologist made me feel like a kid anticipating the arrival of Christmas. I started the referral process in December, and it wasn't until two weeks ago Friday that the big day finally arrived.

(If you are wondering what the heck I am talking about, see this post.)

Shaun dropped me off at the OHSU Center for Health and Healing before heading over to his office for a few hours. (These days he usually works from home on Fridays.) I had twenty minutes to kill, so I sat in the spacious lobby and drank a cup of tea. I didn't feel nervous, but my heartbeat begged to differ, its insistent pounding impervious even to the aural Valium that is "The Girl From Ipanema."

The doctor's office had mailed me a giant packet once my appointment was booked, full of dire warnings about the consequences of lateness and the necessity of procuring all of one's pertinent records. (I had to request charts, images, and test results from the three different doctors I'd already seen.) I'm sure they overstate the case because some people are flaky. I of course took it all very seriously, filling out and mailing in every form, and bringing along everything I was asked to. I'm not sure they'd ever seen anyone so eager to see a doctor. The woman who checked me in actually made fun of me.

"My, my, somebody's prepared."

And then I met the doctor, and I finally got to tell my story to someone who specializes in brains and eyes. When she assured me that a brain or nerve problem would not present itself the way my symptoms do, I believed her.

Fortunately the MRI I'd had previously had gotten great pictures of my eyes along with my brain. The doctor pulled them up and we looked at them together. She pointed out all of the muscles that control my eyes and eyelids, which was fascinating. Then she started scrolling through all of the images. There were lots of them. By the time we got to one that looked just like the aliens in Mars Attacks! I was starting to turn a little green. Looking at so many pictures of my brain was giving me an existential mini-crisis.

"Oh, have you had enough?" asked the doctor, who was thoroughly enjoying herself. "Oh, but come on. Look at this!" And then she showed me a view of the inside of my head that looked like a scrunched up dwarf face. "Isn't it cute?" she said. And then, my friends, she giggled.

A few minutes of lively conversation and good times later, I realized that this was all going to end as I mostly hoped/partly feared it would. My eye muscles get weak when I exercise. There are lots of things that cause weak eye muscles, some of them very serious. I don't have any of those things. There is no explanation for why it happens in my case, but it's not indicative of any other problem, so I can certainly live with that.

The doctor said it's possible that it may just go away. But even if it doesn't, it's not that bad. My vision returns to normal (or normal-ish) within a few minutes if I stop and rest. And the severity varies, so sometimes I can take a walk without being bothered by it at all. It's just a nuisance, not a hardship.

Basically, it's unusual to have this happen at this point in life without being caused by something that needs attention, and we wanted to rule those things out, and now we have. So, good! Very, very good! I forgot to ask if the doctor thinks exercises will help in my case, but I will do that at my follow-up appointment.

We celebrated the end of our long road with lunch at Little Bird Bistro. I was feeling relieved but deflated. 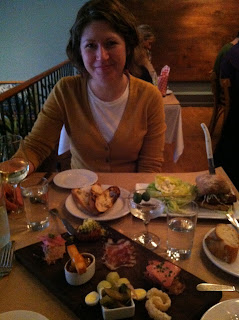 It was nothing a glass of wine and a massive charcuterie board couldn't fix.
Posted by Gypmar at 3:49 PM 9 comments: