Growing up, I never thought much about being a parent. I figured I'd have kids someday, because that seemed to be the way of things. What would my kids do for fun (besides read, of course)? Maybe have tea parties? Play dress-up? Our blended family had four girls and two boys, one of whom was much younger than me, and the other much older. I didn't really know what they were into, with the notable exception of my little brother's obsession with Calvin and Hobbes.

Then I grew up and got married and had two boys, and I learned they were into tractors and construction equipment. And animals and superheroes and weapons and space and robots and monsters and Calvin and Hobbes. And Lego. Boy howdy, are they into Lego.

Anyone who's been around kids for a while knows they periodically molt old interests. A few endure (see Lego), but many are replaced entirely. Nels could identify a knuckleboom loader or a feller buncher as a preschooler, but he wouldn't be able to now.

Our most recent activities kick-started last Christmas, when Nels asked for a model of a battleship. He built one, then another. By the time he started an airplane, Willem wanted in on the action. Between the two of them, they have put together the USS Arizona, the BB-63 Missouri, a P-51 Mustang, a B-17 Flying Fortress, a US Tank M41 Walker Bulldog, a Willys MB Jeep, a Bell H-13H, and a CH-47D "Chinook." An A-10 Warthog is in the works, but Nels seems to have lost the steam to work on it. And yes, I did have to copy all of those names from their boxes.

The wonderful thing about model-building is that it's an activity that both Shaun and the boys enjoy, so they can spend time together and nobody's suffering through it. 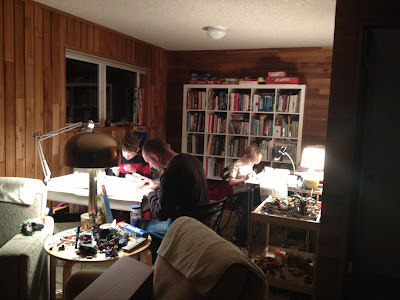 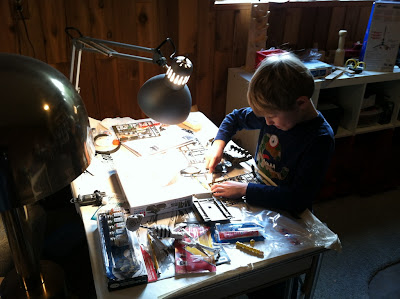 When Willem has a model going, he's always up before the rest of us. I wake up and find him already downstairs and hard at work in the lamplight. It is one of my favorite things. 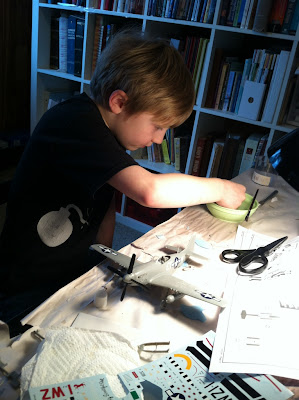 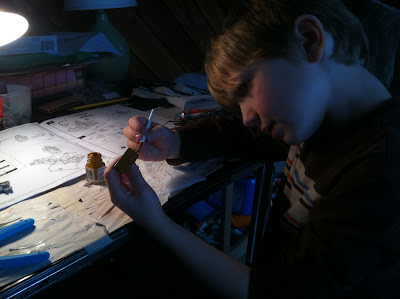 Willem and Shaun each built a Bell H-13H. Otherwise known as the MASH helicopter. 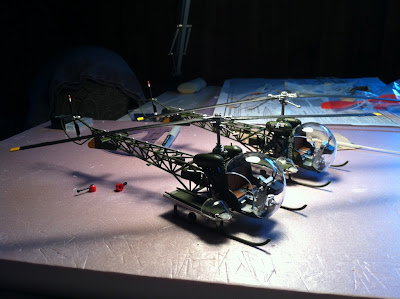 Willem's models live on his bookcase, above the books and underneath the monsters. We should probably bow to the inevitable and line an entire wall of his bedroom with shelves. 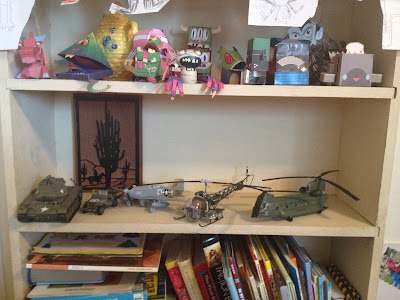 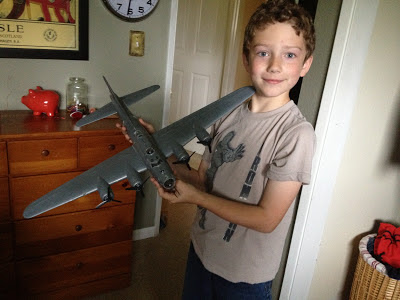 The models are great. But the REAL hobby around here these days is the building and flying of model airplanes. Which needs its own post. Now if you'll excuse me, I'm going to go throw myself a tea party.
Posted by Gypmar at 5:26 PM 1 comment:

Willem's classroom's Mother's Day celebration was yesterday. He'd been looking forward to it for weeks, telling Shaun about it at bedtime over and over. I was expecting to get a manicure like I did from Nels when he was in first grade, but apparently they've revised the program since then. I can't imagine why.

All of the moms showed up at eleven, forming clumps and milling about awkwardly until the kids came in from recess. Our students gave us a (very congested) tour of the classroom before seating us at their desks and serving us muffins and fruit, accompanied by the big surprise: back-rubs. Willem was super excited about it, but when he asked "Can I stop now?" and I said yes, I'm not sure which one of us was more relieved.

After we ate, the kids showed us their "get the wiggles out" dance and recited a poem and sang a song. The song was "Put a Little Love in Your Heart," which I thought was a weird choice. I can't imagine any group of people less in need of that admonishment than a group of mothers being sung to by their six or seven year-old children.

The best activity came at the end. Portraits of the moms lined the back wall, and each mom was supposed to guess which picture her child had drawn of her. Each drawing was accompanied by an info sheet, so you'd think it would be easy to figure out. Not necessarily. 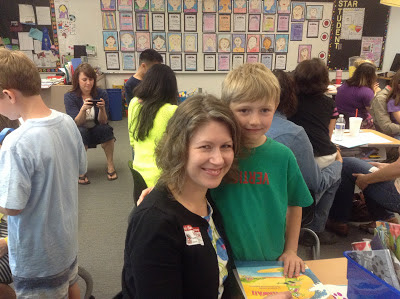 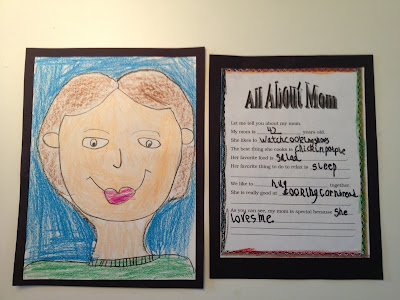 Let me tell you about my mom.

She likes to watch cooking shows.
Haven't watched one since we got rid of cable TV well over a year ago.

Her favorite food is salad.
No.

Her favorite thing to do to relax is sleep.
Can't be any more relaxed than asleep.

We like to hug together.
Very sweet. Weirdly put.

She is really good at cooking cornbread.
Again, Marie Callender's.

As you can see, my mom is special because she loves me.
Yes. Exactly right.

How Sweet It Was

I've always been a dessert person. And while I never would have turned down ice cream or candy when I was a kid, what I really loved were baked goods. Our family dinners reflected the constraints of our era (the eighties) and budget (lots of mouths to feed), but on the rare occasions when we had dessert, Mom went all-out.

Carrot cake, fresh strawberry pie, cheesecake and lemon meringue pie, all made from scratch, spoiled me for store-bought desserts forever. Mom was the designated dessert-bringer to all of our family gatherings, and, once I moved out, I brought dessert places whenever I could. It was always well-received.

But lately, I feel like I'm losing it. Recipes that I love and that turn out perfectly the first time around (like this Rhubarb and Raspberry Crostata) crash and burn on the second try. Nothing tastes quite as good as I remember it tasting. The Salty Chocolate Chunk Cookies I made this week turned out like this: 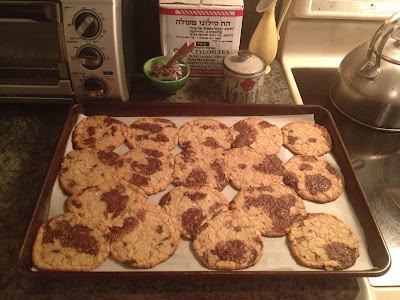 And yet, every once in a while, I'm surprised. My boys have less finicky dessert palates than I do, and they always want those frosted sugar cookies from the grocery store. I have to say, they do have a strange appeal. So, when I saw a recipe for homemade Soft Frosted Vanilla Sugar Cookies, I decided I had to try it.

Wow. They are borderline too sweet, but they are so good. Everyone who tried them (except Shaun, of course) made a noise of appreciation upon taking their first bite. They're even good without the frosting, which is really saying something coming from me. The cookies did spread out more than they were supposed to (I only took a picture of the most successful ones), and I haven't tried making them a second time yet, but I will get to it eventually. In the meantime, I'm ready to shed my identity as a person who always brings a good dessert to a meal and work on being a person it's nice to be around, no matter what my culinary contribution. 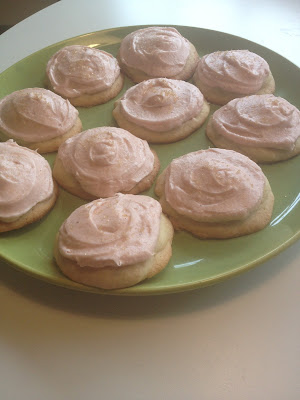 And while my kids always appreciate homemade treats, nothing I've made myself has elicited a comment like the one I overheard Willem making to Nels:

"When Mom bought Oreos, it seemed to change my life."