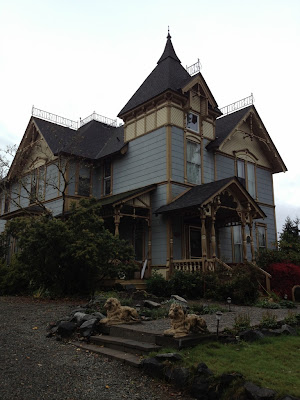 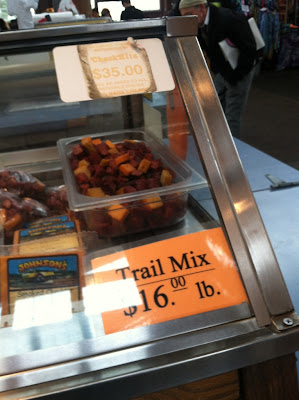 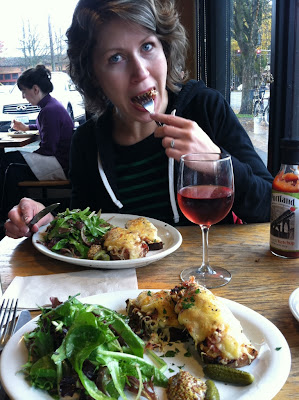 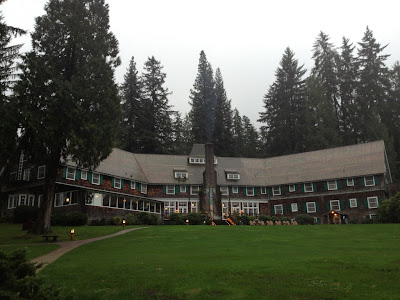 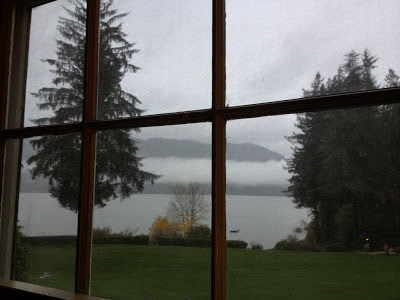 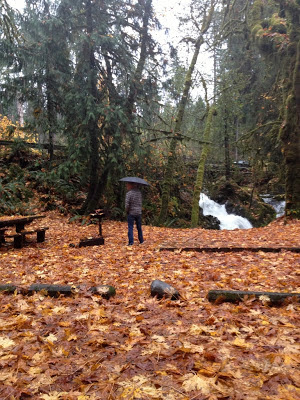 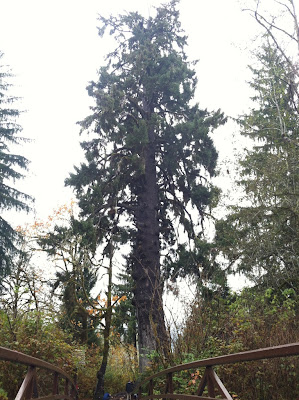 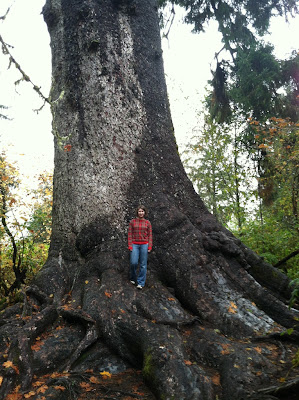 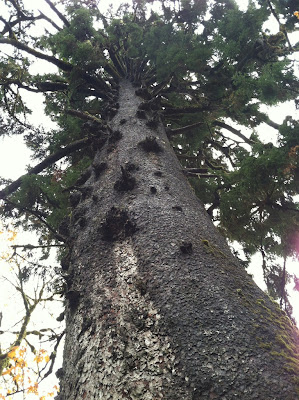 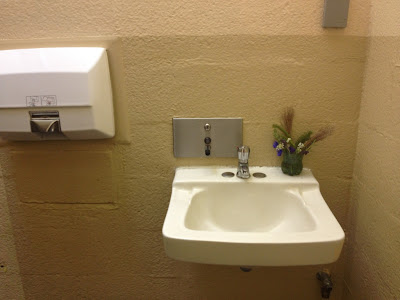 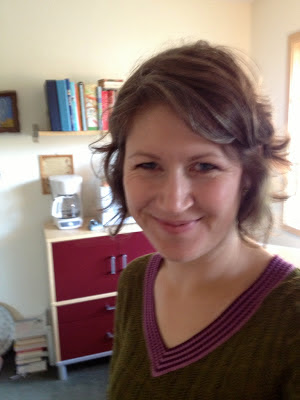 In my forty years I'm so grateful for all the books I've read, the countries I've visited, the friends I've made, the meals I've eaten, the shows I've performed in, the songs that have stirred me, the walks I've taken, the family I love, the beauty of the world and all the creatures in it, and the Word of God that lights the way and reveals the truth. Even if these years were all I had, it would be a gift of more abundance than I could have ever hoped for.
Posted by Gypmar at 5:09 PM 8 comments: 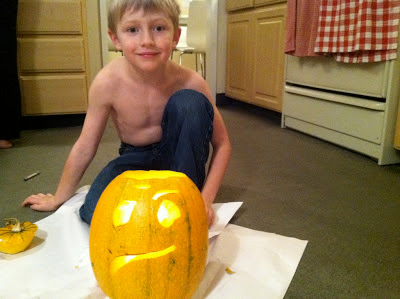 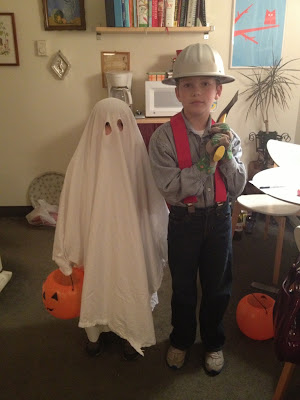 Nels wanted a science and technology-themed birthday party this year. Needless to say, I was stumped as to how to make that happen. Wandering the aisles of Party City, I found pirates and Spiderman and Sponge Bob and Angry Birds, but nothing remotely scientific or technological. Unless you count Iron Man, which I don't.

It finally occurred to me that I could shop for decorations at the educational supply store. Jackpot! I came home with posters of the human skeleton, the solar system, and (the one Nels pored over) the periodic table of the elements. Plus I got pencils that had drawings of brains on them to include in the party favor bags. (I also included Nerds, but I doubt anybody got the joke.) Best of all, the store was selling a plastic tube designed to facilitate the eruption of an enormous geyser when you drop Mentos candy into a bottle of Diet Coke, which was one of the few activities I was hoping to do.

Nels wanted a microchip cake and, thanks to Shaun, he got one. With his age written on it in binary! 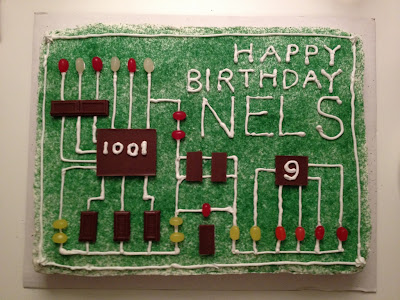 I always have an impossible time scheduling Nels's party, because it's during soccer season, and kids have games all weekend. So this year I took my cue from what some smart parents had done last year and scheduled the party for the middle of the week on the early release day. I even offered to take everybody home from school with me.

It worked too well. Everyone could come. We were too many for the minivan, so we walked. Fortunately my mom arrived just in time to accompany me. It definitely took the two of us to herd that gabby group home!

For the first time since we moved here four years ago, it was sunny on Nels's birthday. The boys made paper airplanes and flew them off the back deck, with a prize for the one that flew the farthest. Next we did a lemon juice/baking soda fizzing experiment that wasn't terribly exciting but killed a little time and traumatized a few guests because I told them they could taste it if they wanted to. Then it was time for the grand finale, the Mentos in Diet Coke geyser. It was all over in a flash, but it was impressive. Here's Shaun, surrounded by a rapt crowd, setting it up. 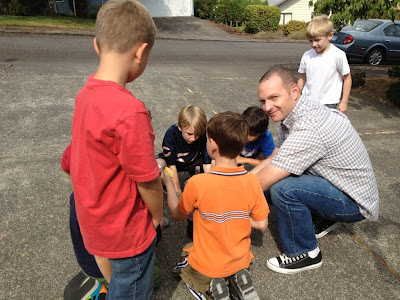 Cake and ice cream were eaten, and presents were opened, and the boys dispersed to play until their parents came to pick them up. They were uncannily quiet, they made very little mess, and they at least appeared to be having a good time. I worried for naught. As usual. 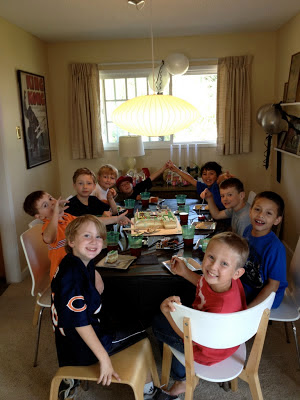 *  *  *
Willem's Angry Birds party was on a Sunday afternoon, on his actual 7th birthday, and everyone he invited was able to come too!

I found some amazing paper monster masks (at New Seasons in the checkout line, of all places) for the boys to color in. Shaun and I were astonished at how intently they all worked on their masks, and for how long. Not one of them blew it off. That was a big relief, because the rainy weather limited our activities, and I was afraid we would run out of things to do. 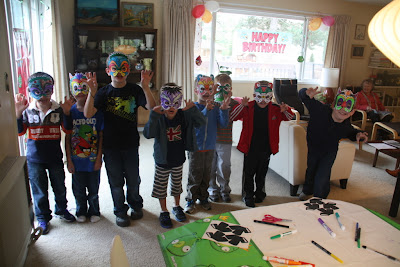 Here's Willem with his custom-by-dad cake. Our boys are totally spoiled, cake decoration-wise. 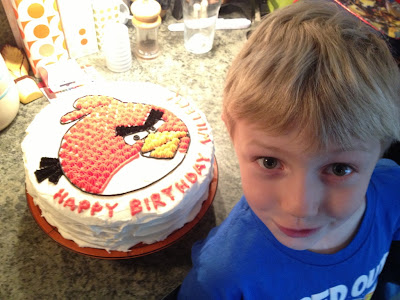 Willem got so many thoughtful presents from his friends and family. It made me happy, because he really doesn't ask for much. 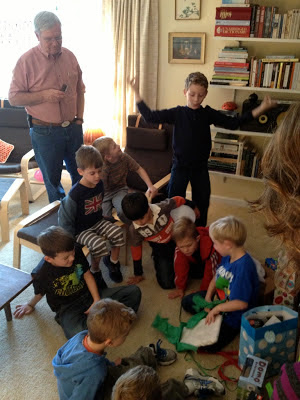 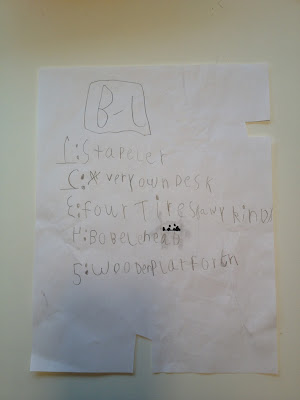 I love him so. And I'm glad to have the parties behind me for one more year.