I know, it's weird to be posting about summer right now. For whatever reason, I have been avoiding my blog. But I didn't want to get back to it without covering a few of the great things that happened last year. Last year. Gulp.

In August my family came to see me. My sister, her husband, and their two kids live in Boston. After high school, Annalaura moved from California to Cambridge to go to Harvard. She met her now-husband Cliff Chuang there and never moved back. So a visit from them is a big event.

Our dad and step-mom Juli wanted to see the Chuangs too, and it seemed more fun to be all together, so we planned to have them come down from Bellingham for part of the Chuangs' stay. Of course my mom in Bend needed to visit with them as well. And so did my sister Hillary in LA. And the time frame included Hillary's birthday, so her boyfriend should come for that. And Hillary pointed out out that my step-sister Kim and her kids in Grant's Pass would also like to see everyone (a major oversight on my part.) I may have felt a bit of panic at some point.

I needn't have worried, though. We only had EVERYBODY all at once on one day for Hillary's birthday. Hotel rooms were arranged, mattresses were dragged out, my sisters cooked, and people were easy and kind. I get a little anxious when I see any of my family members (even the ones I'm closest to) because it reminds me of some of the messier aspects of being raised in a very blended family. But what I realized this summer is that I am very blessed with a bunch of caring people who are FOR me. I know plenty of people whose families are intact who have to deal with undermining in-laws, or grudge-bearing siblings, or any other number of problems. The people in my family wash the dishes and do the grocery shopping when they visit me, and bend over backwards to not be any trouble.

I didn't realize the historic import of this picture when I took it. This was the day we let Minecraft into our lives. My dad loaded it on his portable device so all the boys could play together. It's been Minecraft ever since. 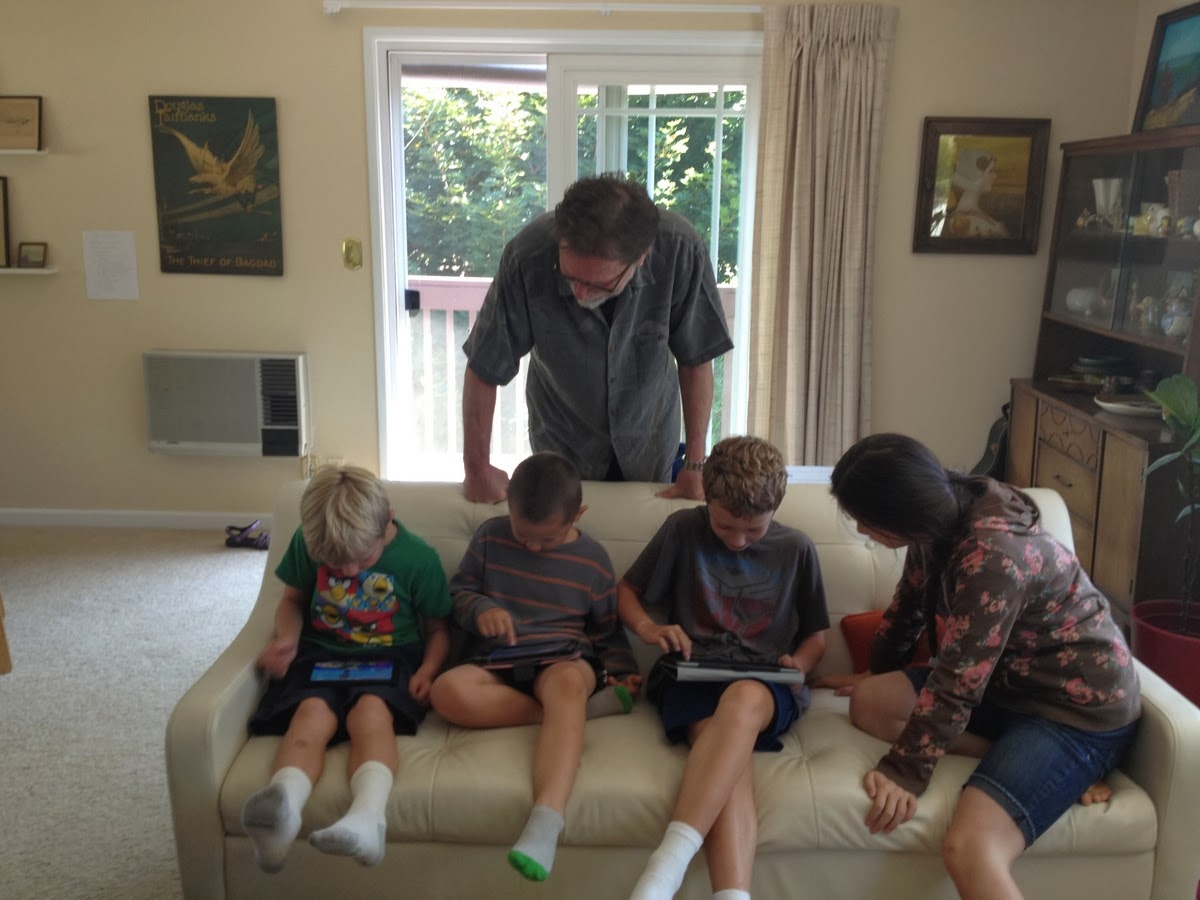 Here are my dad and Nels chatting in the afternoon shade. I couldn't pick just one of these pictures of the two of them. Nels is so engaged and glowing from having the undivided attention of his Grandpa Scott. 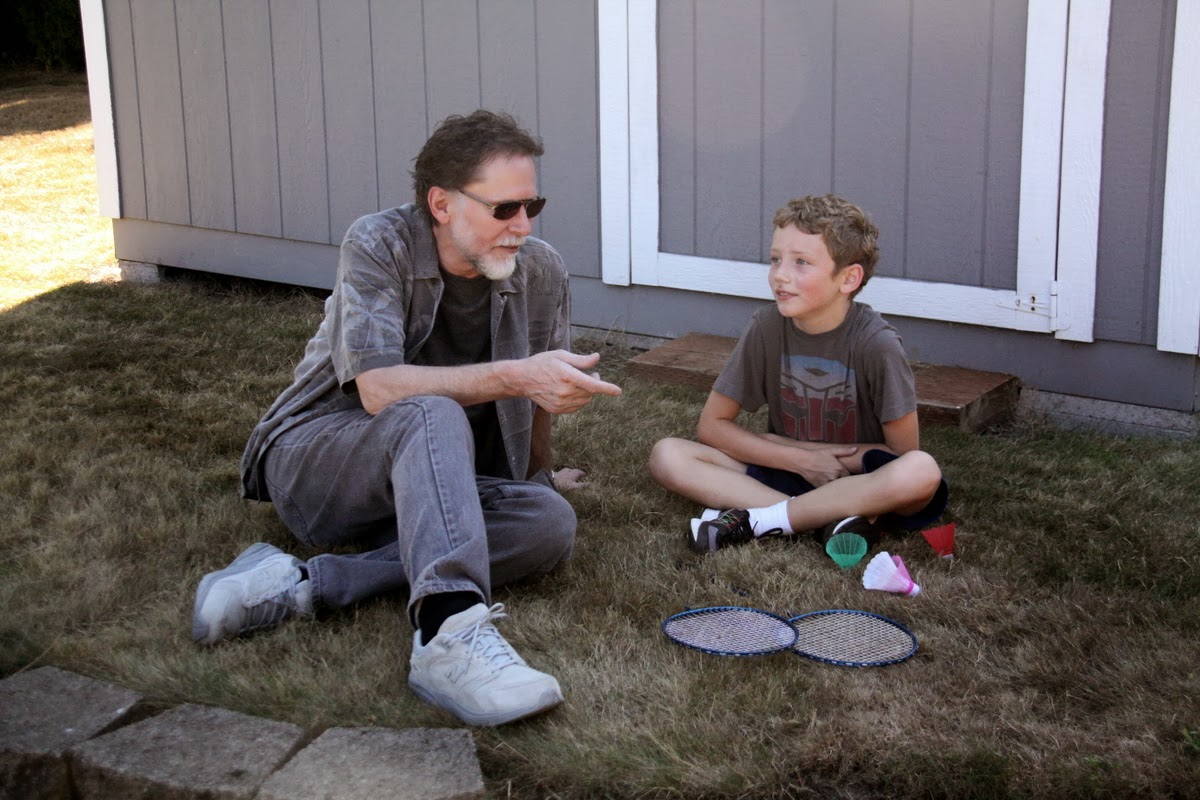 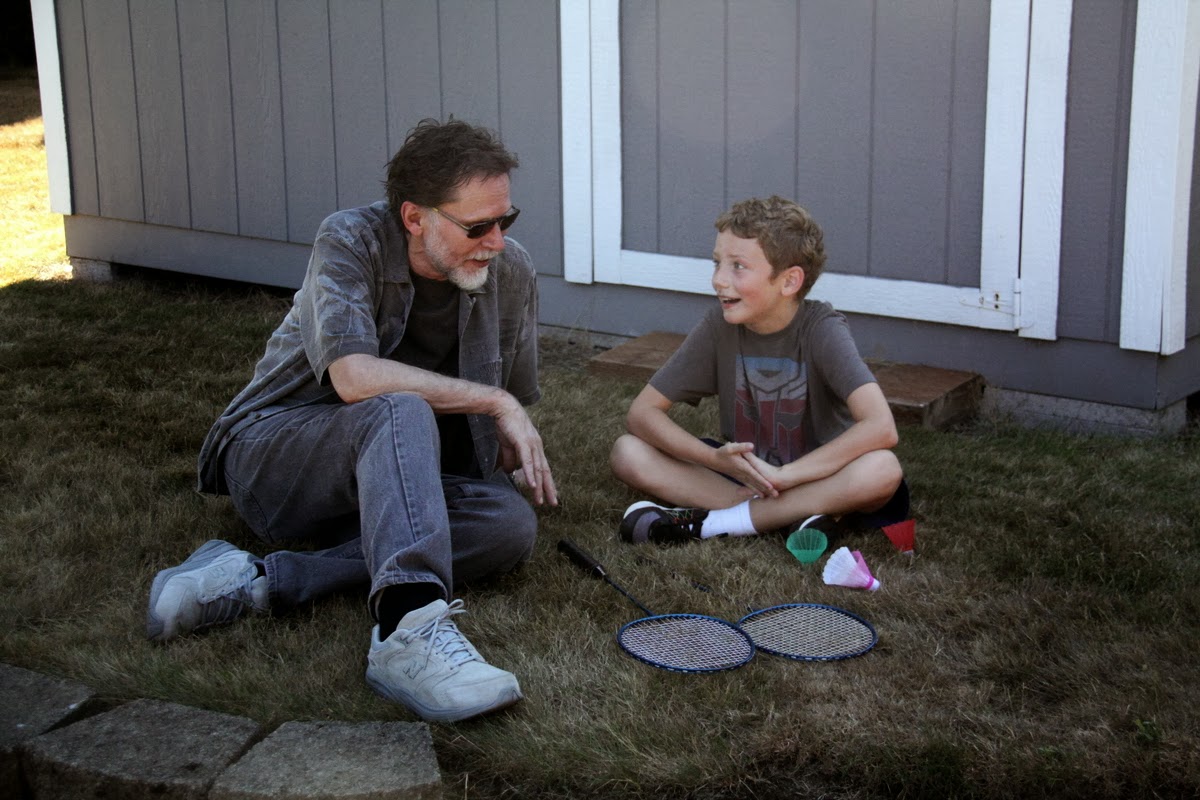 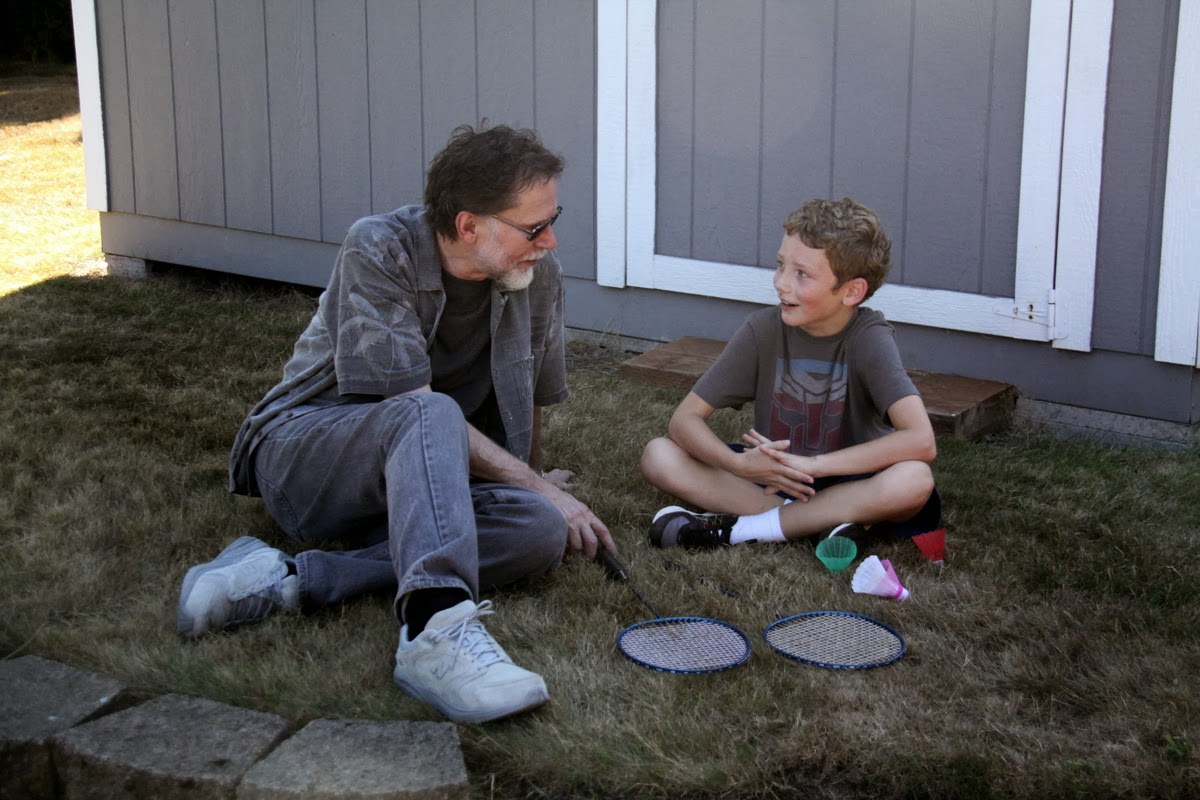 All four sisters in one place! This pretty much only happens at weddings. Hillary is (voluntarily) cooking her birthday meal, as she usually ends up doing. Annalaura is working alongside her. Kim and I are catching up with each other, drinking beer, and being an appreciative audience. 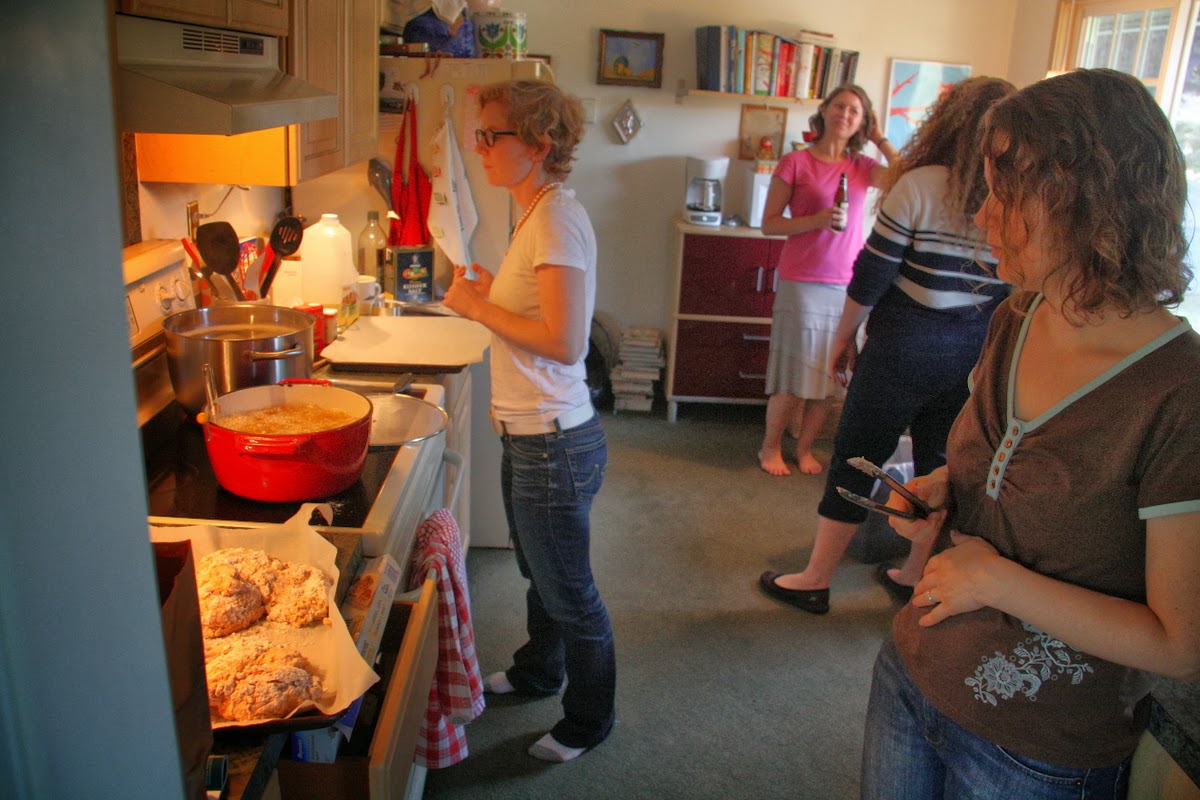 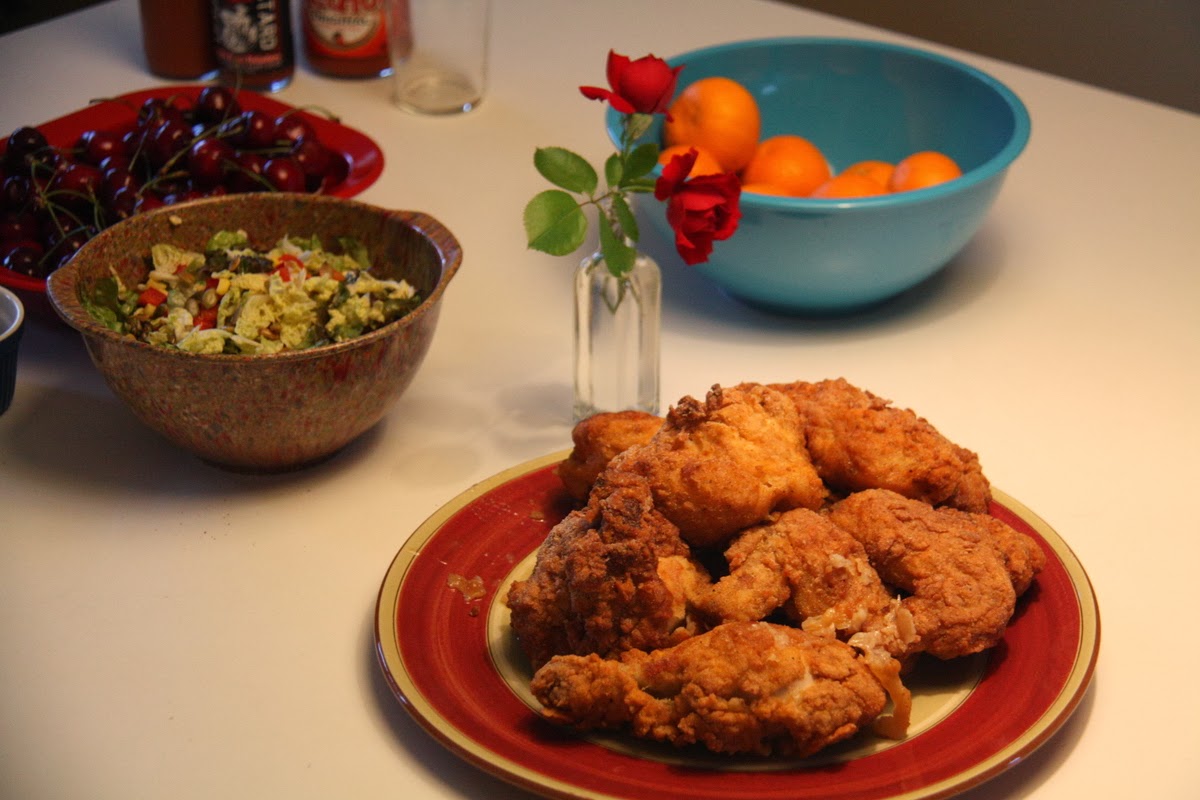 Here's the birthday girl with her adoring niece and nephews. The kids have all grown so much since then that none of them really look like this anymore. 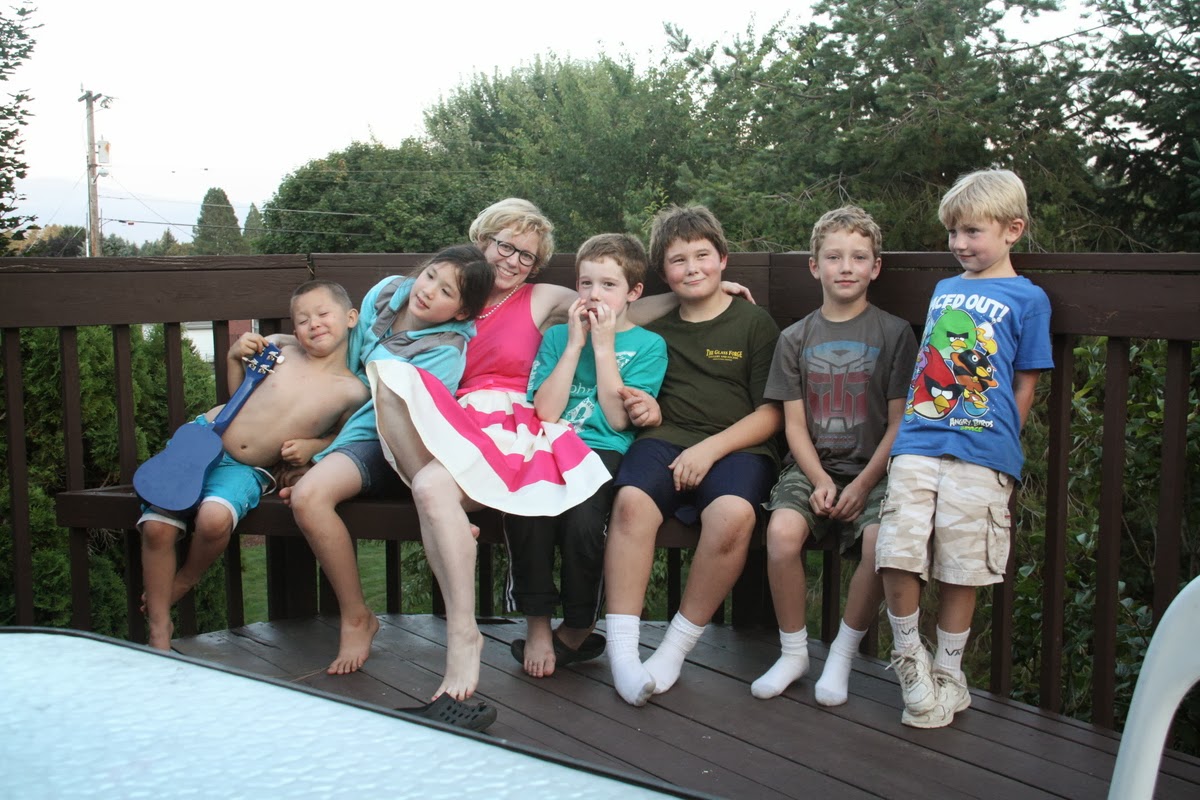 Bonus points to Hillary's boyfriend Denis for mixing up some lovely cocktails, and to the two of them for introducing us to one of our new favorites (not pictured here), The Laphroaig Project. YUM. 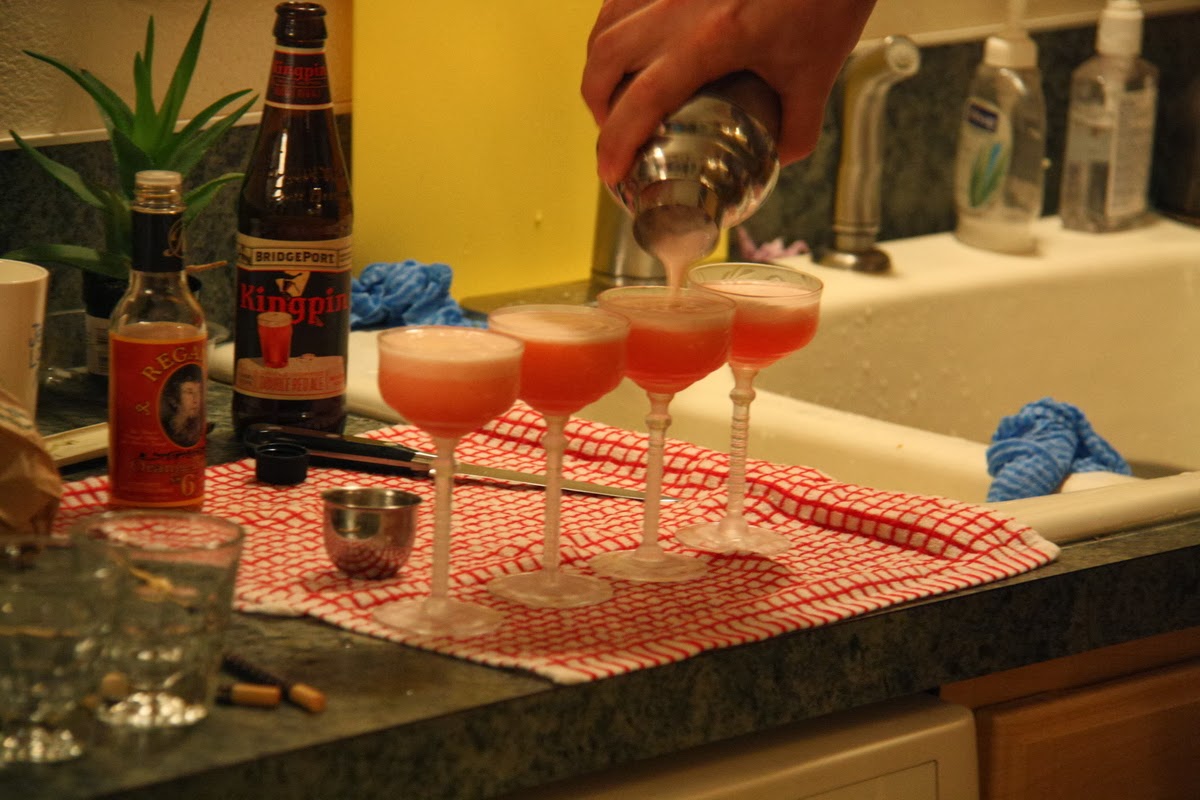 The Chuangs stayed with us for a week so we got a chance to do a lot of local things. We visited Multnomah Falls... 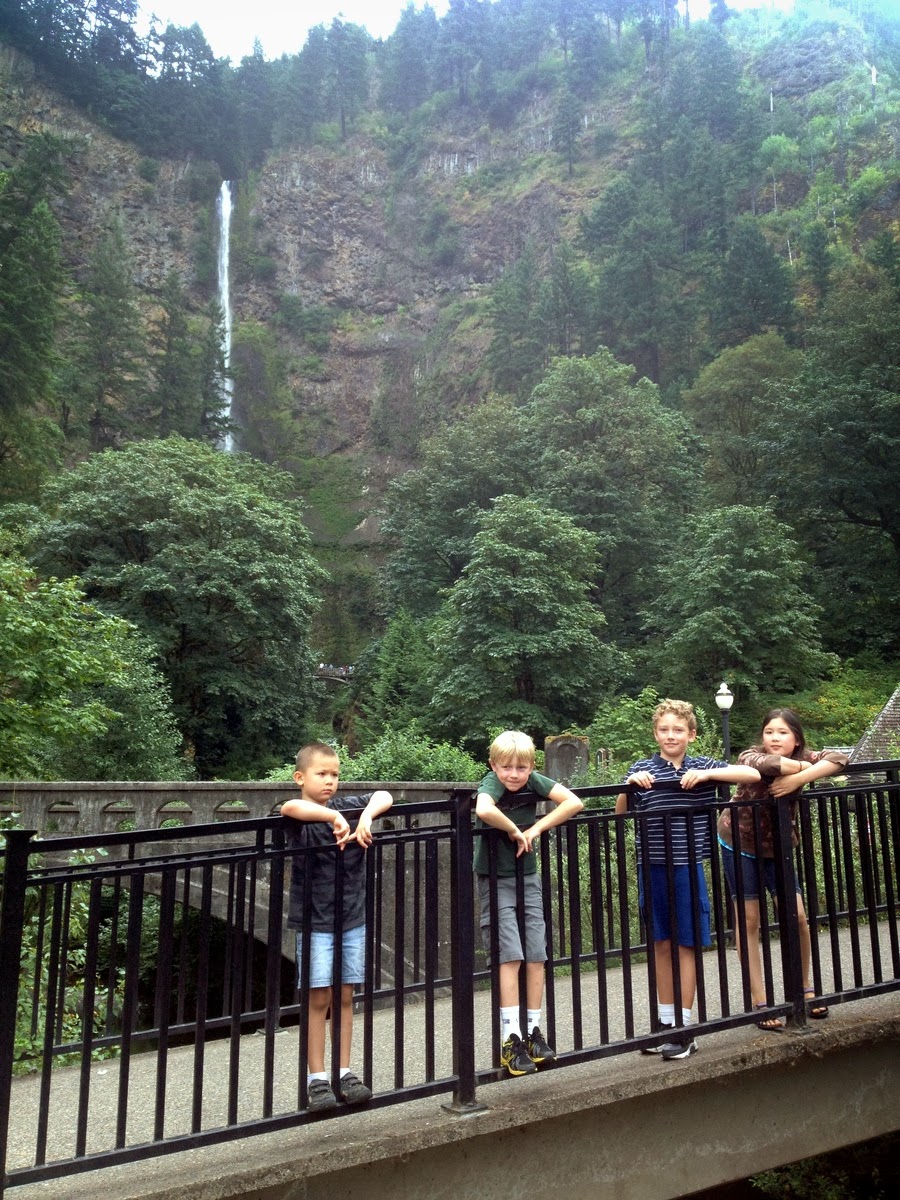 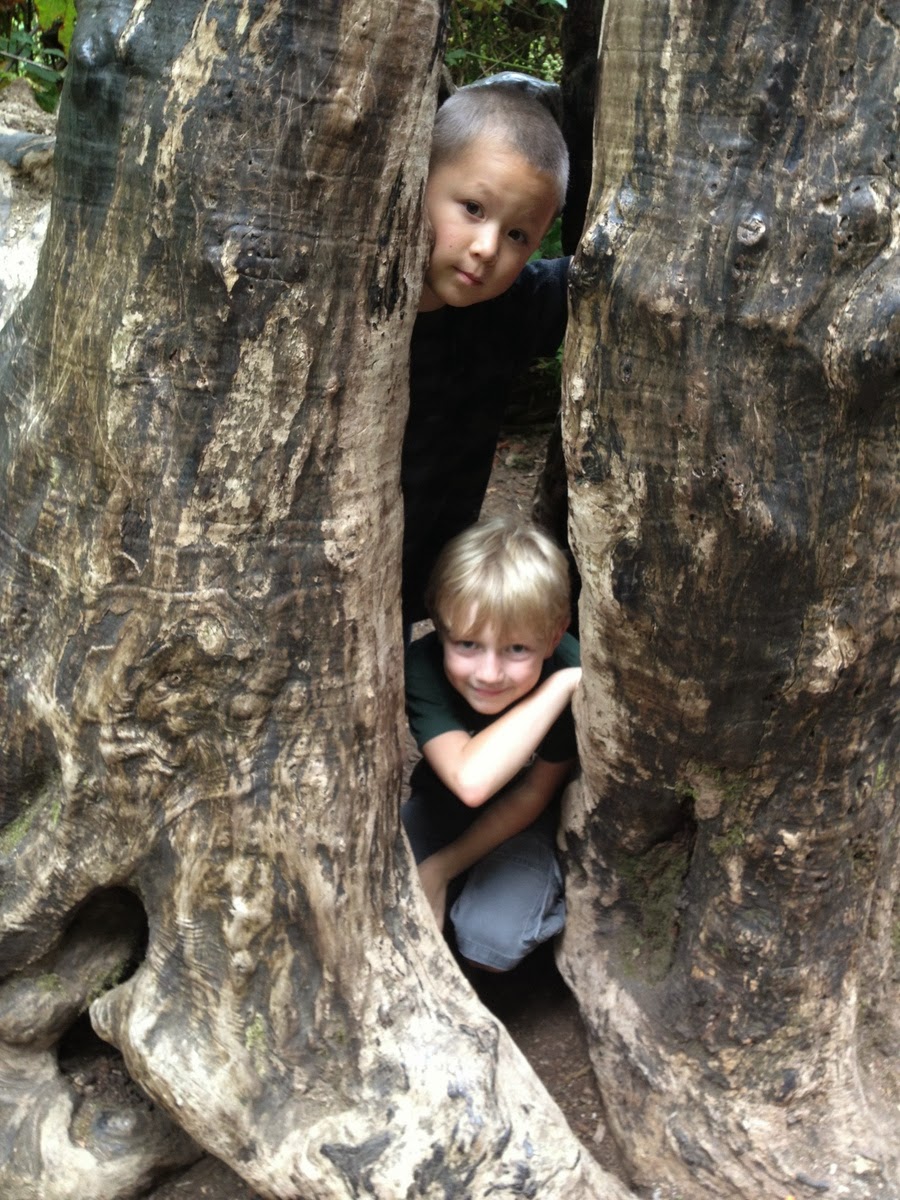 and took a trip out to Shaun's folks' tree farm and log house, a trip which wouldn't be complete without journeying on to eat at Camp 18. 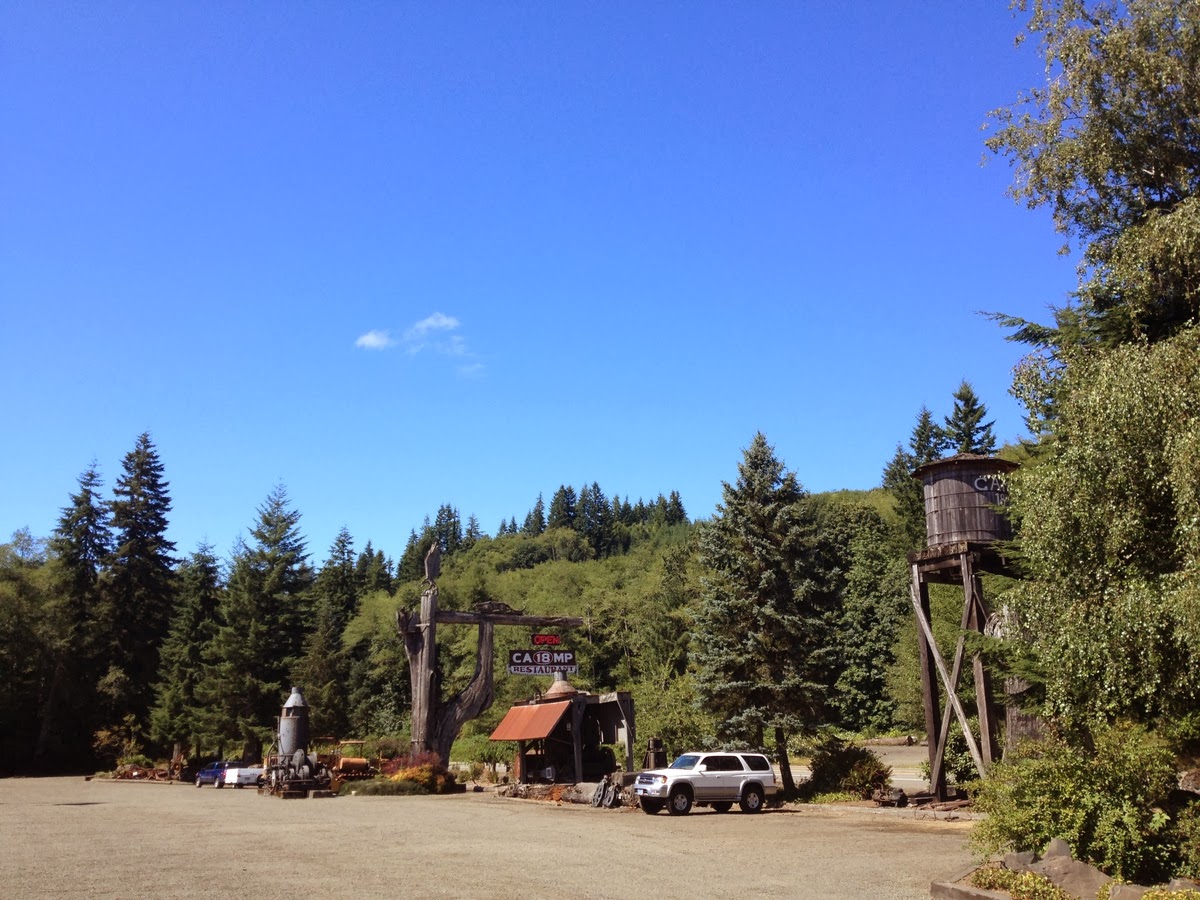 Shaun took the interested (big) kids to the flying field. 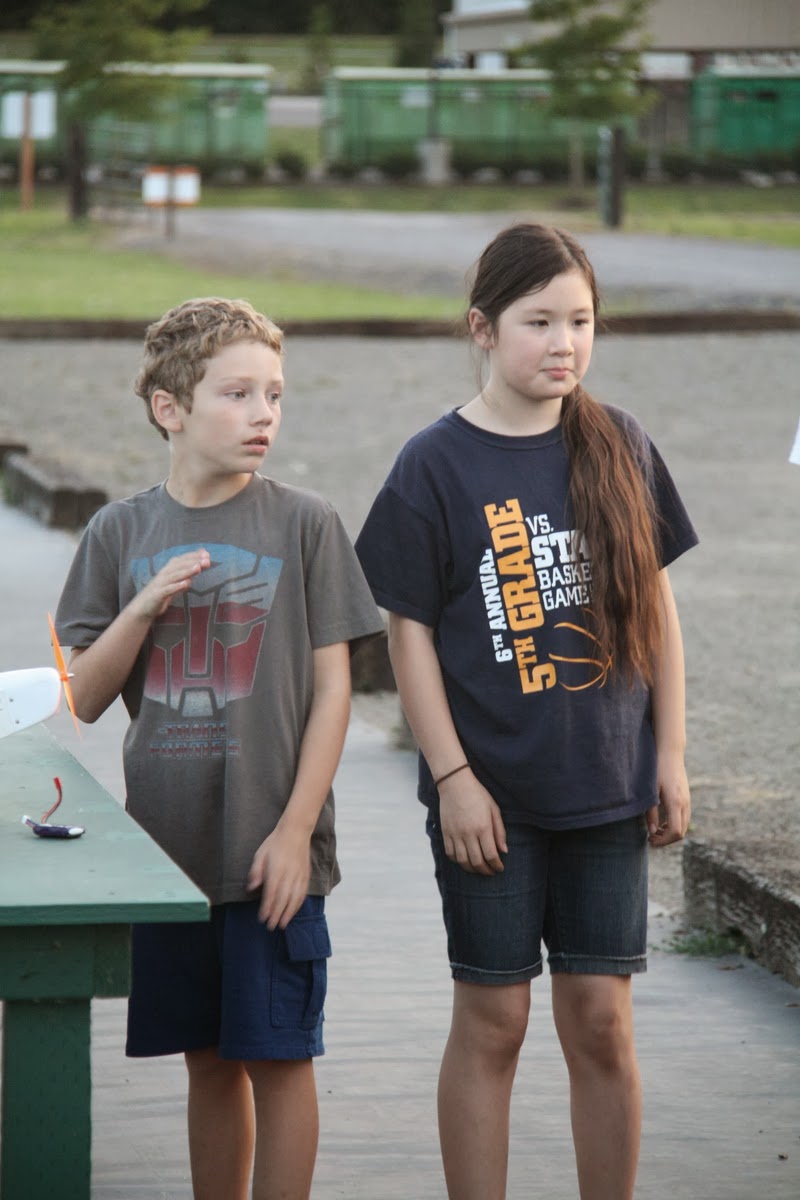 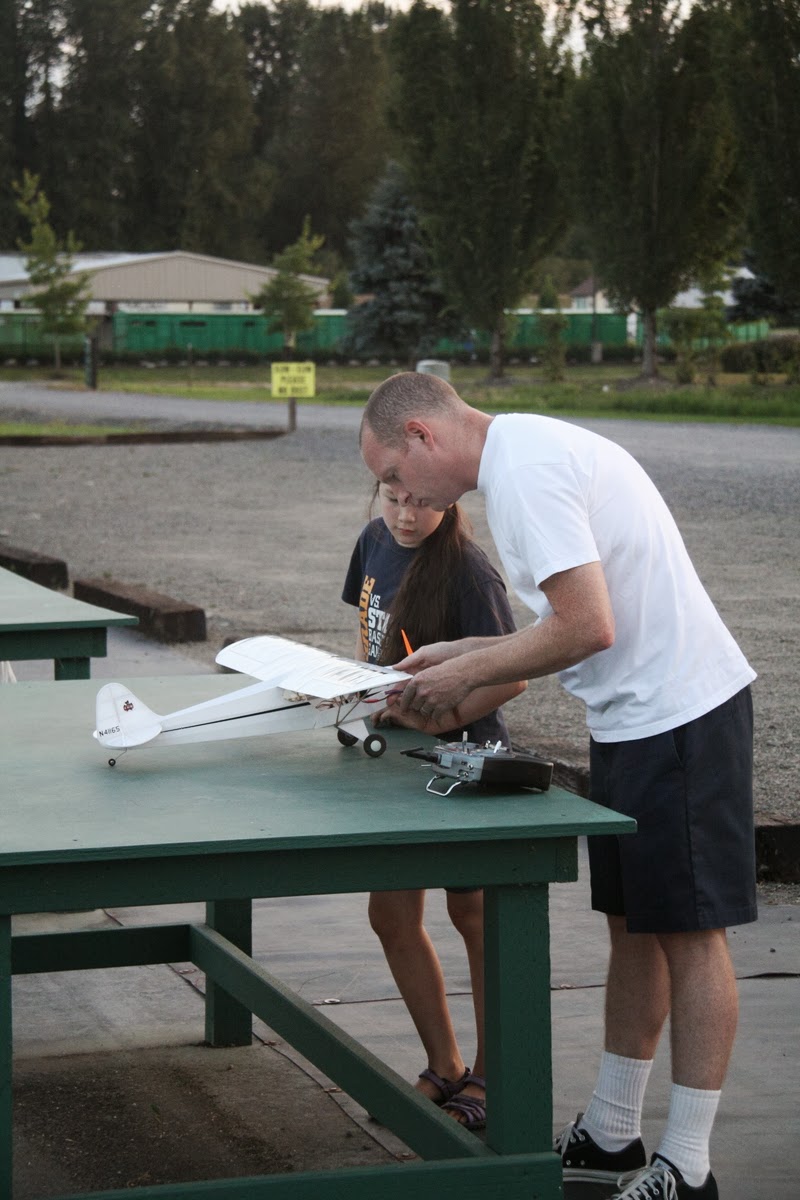 He built this plane from scratch. I'm starting to lose track of how many planes he's made at this point. 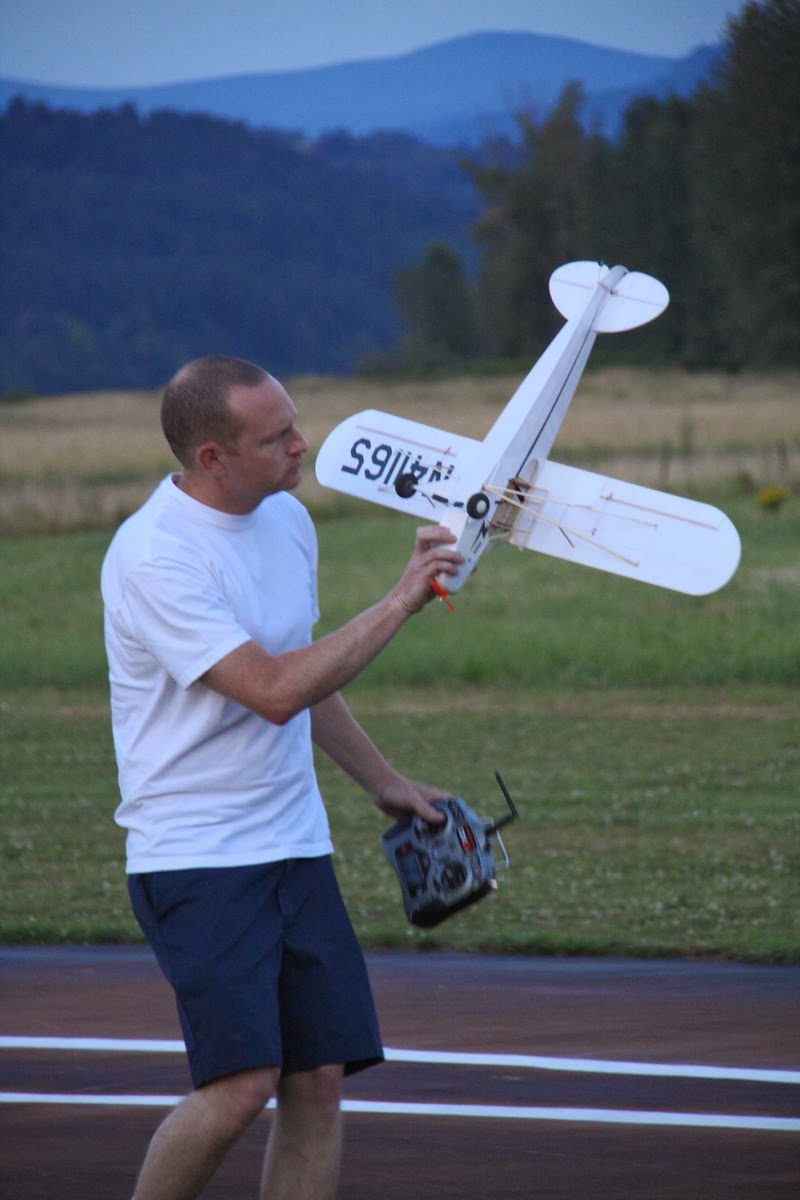 My friend Patty lent us her badminton set, which provided an excellent outlet for the astounding amount of kid energy our combined children produced. Uncle Cliff is supervising here. Let it be noted for the record that Cliff, due to his severe cat allergies, ended up sleeping outside on our deck for several nights. He is the definition of a good sport. 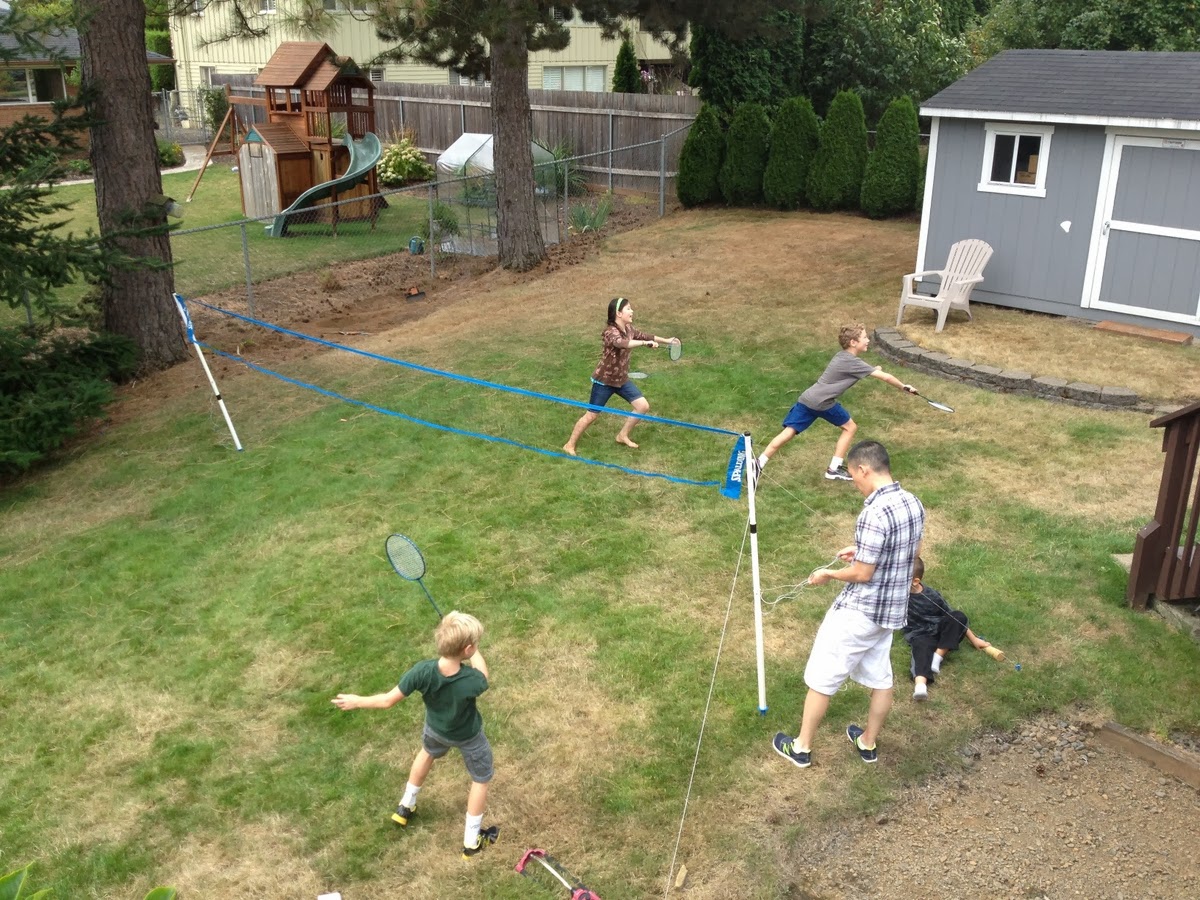 It was especially fun watching Willem and his cousin John-Luke enjoy each other's company this year. They are two odd little peas in a pod. I still haven't gotten over the novelty of being able to walk through our neighborhood to a lake. After several snowy, stormy days, it's nice to look at pictures of the sunshine and know it will come again. I hope my family will too.
Posted by Gypmar at 8:42 PM 3 comments: