Shaun has always liked aviation, though he ultimately didn't end up going down that road career-wise. Encountering lots of flight-related stuff recently has stirred his interest back up. And when we ran across an RC (radio controlled) airfield on our trip to Walla Walla, it was the last little nudge Shaun needed to get an RC plane of his own.

Flying his Hawk Sky (I always want to say Sky Hawk) for the first time was such an intense experience that Shaun was shaken for the rest of the day after he flew it. It's not every day I get to see Shaun rattled, so that was fun. And it's fun for him too. He likes flying RC planes because it's hard. Which is exactly the opposite of why I enjoy my hobbies, and one of the things I admire most about him.

It's not unusual to meet pilots in town, because we're so close to PDX here and the schools are good. Our next-door neighbor flies for Horizon. But it was unusual (and exciting) when two F-15 pilots (brothers-in-law) and their families started attending our church. They ended up joining our weekly small group, so Shaun has been able to ask questions of them to his heart's content.

We also uncovered a fellow RC enthusiast at church, who invited the boys to watch the pylon races that the Fern Prairie Modelers hold at our local RC airfield on Saturdays. They've been several times and are enjoying the local color. :)

How airplane-crazy is it around here? Well, one night I found Shaun reading the FAA handbook online. For fun. Nels once came home from school and skipped his allotted TV time in favor of building an airplane he'd been designing in his mind all day. (One possible explanation for why it takes him so long to finish classroom assignments.) And just now Willem walked into the office and grabbed the two thick airplane identification guides that Shaun got for his birthday.

"What are you doing with those?"
"Going to read them."

We have a flight simulator on the computer, which all the boys like to use. Willem uses it occasionally, but Nels has practiced enough that he was able to transition to the Champ (Shaun bought it as the "family" plane) and fly in real life. Willem's not quite there yet.

The third plane they fly is called a Slow Stick. It's big and (duh) slow, so it can be flown in a smaller area. Nels helped put it together. 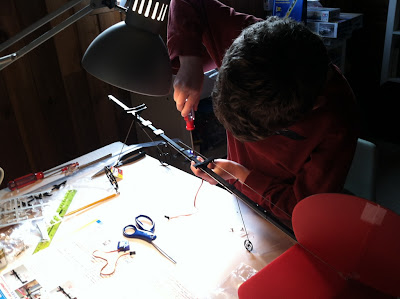 I like its strong graphic quality. It looks good both in the air and hanging on our office wall. 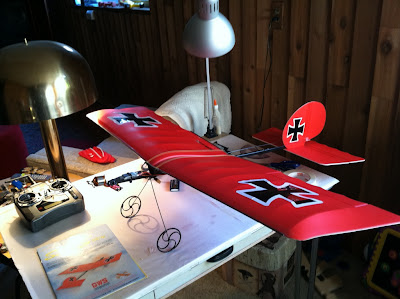 But nothing beats the balsa-wood models for beauty. 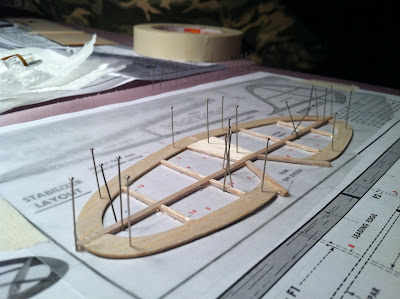 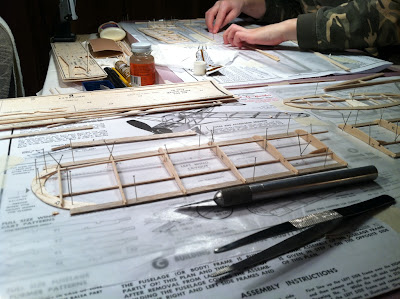 Shaun built a Piper Super Cub 95 and Nels a Cessna. I'd tell you the model but I don't want to go hunting for the box. 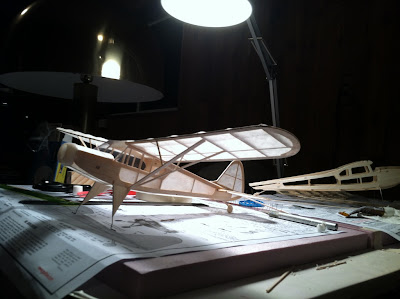 The tissue paper coating is treated with dope and then heat, which tightens and strengthens it. It looks like a panel in a Japanese screen. 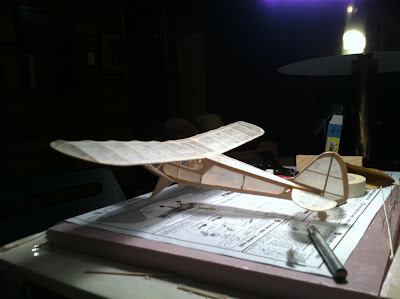 Both boys are enjoying the airplanes (they were beside themselves when they received their Academy of Model Aeronautics membership cards in the mail), but Nels especially so. Here he is (really tiny) flying the Champ at the softball field a block away from our house. 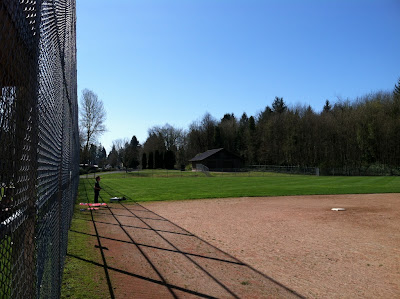 And here's Nels flying at the Fern Prairie Modeler's field. He's sharing the controls via "buddy box" with a fellow named Judd, who wins the pylon races every week. It's great to see an old-timer welcome and encourage a young person he hardly knows. 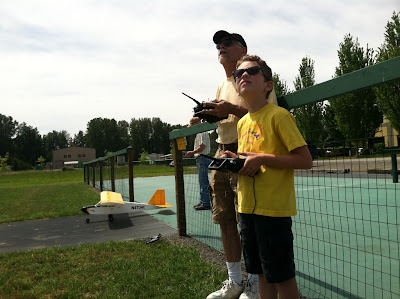 The planes go with us on visits to the Grandmartins, and are flown in the neighbor's field when the weather permits. I don't want to learn to fly, but watching reminds me: 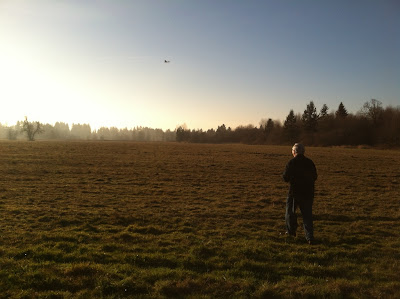 Some glad morning, when this life is o'er,
I'll fly away.
Posted by Gypmar at 1:59 PM 4 comments: